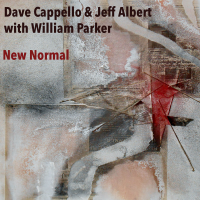 If sentimentality is the synonym of nostalgia, then the antonym is anticipation, and maybe a better word would be modernity. That word comes to mind spinning the trio recording New Normal by trombonist Jeff Albert, drummer Dave Cappello and their guest, bassist William Parker.

Sentimentality is often associated with New Orleans, the birthplace of jazz. While the uninitiated (and a certain musical family from NOLA) often look backwards to sounds of a bygone era, let us not forget that the city birthed the innovations that prompted musicians to play notes not written into the score. Jazz's "big bang" has continued to be heard on the fringes of the universe, and when it reverberates back to the city, it's worthy of attention.

Cappello a former member of Bern Nix's band has been making music for some time in the Jeff Albert Quartet and the pair also released a set of improvisations, Duets 2014 (Breakfast For Dinner Records, 2015). Albert's trombone can be heard in collaboration with key Chicago improvisers like Tim Daisy, Mars Williams, in Hamid Drake's Bindu-Reggaeology band, and with fellow trombonist Jeb Bishop in Lucky 7s.

Certainly, bassist William Parker needs no introduction. A force in free jazz and experimental music since the 1970s, his discography from Cecil Taylor to Matthew Shipp should be measured more in board-feet of your musical library, then titles. Parker opens the all-improvised recording with a bowed/rubbed sound that draws energy from inside the earth's core and spurs thunder from Cappello's drum and frenzied blasts of trombone. The trio then morphs into an agreeable groove when Parker picks up his flute. That amenable feel pervades the session. "Tuesday Night" steadies a pulse for a bluesy muted trombone soliloquy, and the growl of "L'Histoire" opens up, seeding a widespread area, Cappello's kit fueling the winds. Where another trio might idle, fishing for ideas, these three improvise with a homogeneity that produces a consistent sound. "Sidereal Will" parades an African rhythm, Cappello and Parker escorting the winding twists of Albert's operatic trombone solo. Cappello, Albert, and Parker rewrite the future history here, without a second thought.