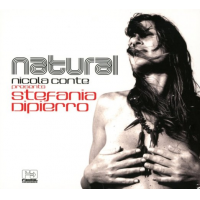 Based in their homeland of Italy, composer, multi-instrumentalist and producer Nicola Conte first worked with singer-songwriter Stefania Dipierro in Conte's 1990s collective called Fez. When Fez disbanded, Dipierro moved on to share her rich and succulent voice through a series of other collaborations, while Conte released a series of works in samba-influenced acid-jazz that was acclaimed throughout Europe, including his five- volume series Viagem, a look back at bossa and samba jazz lost in the past which inspired his music in the present.

Their first collaboration in fifteen years, Natural reunites Conte as guitarist, songwriter and producer, with Dipierro as songwriter and vocalist, for a program of originals, jazz classics, and bossa/samba classics in the company of some of Italy's finest jazz musicians, including and especially trumpeter Fabrizio Bosso and Gaetano Partipilo on alto sax and flute. It radiates the gloriously warm, glowing groove of Brazilian samba filtered through European jazz and hip- hop, while Dipierro's stylish voice pours into your ear like smooth, smoky whiskey perfectly shaken and served over the rocks of Conte's shimmering production.

But the sadly beautiful, melancholic sound of Helen Folasade Adu (Sade) comes through strongest of all: In the way Dipierro caresses and reshapes the line "It's hard to be true, so please come open the door" in Betty Carter's "Open the Door"; the way she phrases and self-harmonizes in Conte's streamlined "I Feel the Sun On Me"; and especially the title track, which sounds built up from the rhythmic blueprint of Sade's "Keep Looking."

Bosso's trumpet sings prettily, nuanced and spirited, alongside Dipierro's doe-eyed vocal in Conte's loose arrangement of Steve Kuhn's "The Meaning of Love," and the peaceful, soft as a sunrise "Que Maravilha." The curtain finally comes down with "Joia," a crackling percussion/vocal duet from the Airto Moreira/Flora Purim Brazilian tradition.

But these descriptions and explanations don't really do justice to Conte's graceful, flowing musical poetry. Some music grabs and holds you more than other music. Natural simply will not let you go.

Maracatu Atomico; Softly as in a Morning Sunrise; A Gira; Within You and I; Open the Door; Ainda Mais Amor; Caminhos Cruzados; The Meaning of Love; Natural; I Feel the Sun On Me; A Menina Dança; Vento Bravo; Que Maravilha; Joia.