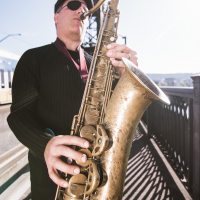 "Wilensky's individuality can be heard with his first notes. His sound is bright, crisp, and completely relaxed in all registers. His lines are direct, to the point, and completely his own; he just does not sound like anyone else."
—Saxophone Journal

Dan Wilensky was born in Ann Arbor, Michigan, and moved to Berkeley the following year. Music was in the air at the Wilensky house: every family member played at least one instrument, and family jam sessions were frequent. He began piano lessons at age 8 and saxophone the following year after hearing the Duke Ellington Orchestra perform at Berkeley High School on a field trip. Dan flourished in the rich school music program created by Herb Wong, Dick Whittington, and Phil Hardymon, and also studied with BHS grad Steve Elson, and his teacher, Hal Stein. As a teenager, he street played, performed with schoolmates Benny Green, Craig Handy and Steve Bernstein, gigged with local bands, attended jazz clinics, won top honors in various competitions, performed at the Monterey Jazz Festival three times, and was a guest soloist with Woody Herman. When he was 17, Dan studied for a year with jazz legend Joe Henderson, and received a scholarship to the Eastman School of Music.

The summer after high school, Dan heard that Ray Charles was looking for a lead alto player for his big band. He auditioned, and got the gig. “Ray told me to be in LA on Monday. It was surreal,” Dan recalls. After six months with Ray, a brief stint at Eastman, and six months with Brother Jack McDuff, he moved to New York.

“It was like starting all over. I was street playing again, doing rodeos out at Nassau Coliseum, and playing funerals in the Village,” said Dan of his first year in the Big Apple. He recorded, gigged and toured with dozens of small groups, including Who It Is (with Cornell Dupree, Steve Gadd, Will Lee, and Richard Tee), Slickaphonics (featuring Ray Anderson and Mark Helias), Tom Pierson, Teramasa Hino, Scott Johnson, Peter Moffit, Tim Ouimette, Jens Wendelboe, Joe Locke, and Scott Hardy. In 1985/’86, Dan won a National Endowment for the Arts award for jazz performance and composition, played in Bob Fosse’s Big Deal (racing across town every night to play with the Playboy Club house band), and toured with Steve Winwood. Back in town, he played on numerous commercial jingles, film soundtracks and TV themes, and can be heard on over 250 records, including hits by Santana, Madonna, R. Kelly, James Brown, Janis Siegel, Hall & Oates, Linda Eder, Freddie Jackson, Faith No More, Mark Murphy, and Melissa Manchester, as well as more esoteric projects of all stripes.

Other career highlights include touring with Joan Baez as her pianist, performing in several videos and TV shows with David Bowie, Steve Winwood and and Prince protégé Martika, playing with Rick Derringer in the TV house band for Joy Behar’s Way Off Broadway, and gigging with Ben E. King, The Four Tops, The Temptations, Carole King, Cab Calloway, Darlene Love, and Aretha Franklin. Dan also performed extensively at many of New York’s legendary (and sadly defunct) clubs, including The Bottom Line, The Village Gate, Sweet Basil, Mikell’s, Seventh Avenue South, and The Lone Star Roadhouse, as well as larger venues such as Madison Square Garden. “Extensive world travel, three decades as a sideman for many legends, and a beautiful family have been phenomenal gifts,” he said. “But I’ve neglected my own music since I recorded my first CD in 1997.” (Note: a quartet date with Mark Soskin, Marc Johnson, and John Riley was never released.)

Discussing his second record as a leader, If You Only Knew, Wilensky said, “I’ve played and listened to all kinds of music my entire life, and my career has taken many detours away from traditional forms and instrumentation. Obviously, I’m not unique in that respect: most musicians of my generation have diverse influences, and are fluent in more than one genre. Anyway, it’s great to get back to composing and recording “live” acoustic jazz with no studio tricks."

"When I first got to New York, there was a more 'organic' jazz scene. There were loft jams, lots of clubs that supported jazz, and it was less crowded. But good musicians and composers always find a way to be heard, and I’m floored by all the great stuff happening right now. There are so many burning saxophone players out there that sometimes I wish I'd picked the sarusophone. Regardless, I’ve got a band that's a pleasure to lead. These gentlemen play with command, sensitivity and heart, which made this project a joy from start to finish. I think this record is the beginning of something good.”

On the music: “I’ve been writing music since I was 12. In fact, I wrote one track, 'In Our Time,' when I was 17. But a lot of my material was work-for-hire stuff, or was never recorded properly. Most of the new material for this record was written during the month after I played several gigs with my quartet; I couldn’t stop hearing new music in my head. As a composer, you hope for these periods of heightened awareness. The only words that came to mind were ‘Finally. Thank you.’”

Currently, Wilensky is featured in the music for the Emmy® - winning PBS children’s show Between the Lions, and performs, records, and teaches in the greater Portland Oregon area. His 7 records as a leader, "And Then Some," "If You Only Knew," "Group Therapy," "Back In the Mix," "Made In Portland," "Good Music," and "All In All" are available at CDBaby.com, Amazon.com and iTunes.com. His popular book, "MUSICIAN! A Practical Guide for Students, Music Lovers, Amateurs, Professionals, Superstars, Wannabees and Has-Beens" is available at your local bookstore, Dan's eStore, and Amazon.com. Wilensky's latest record, "ALL IN ALL," released in 2020, features Portland, OR veterans Clay Giberson keyboards, Bill Athens bass, and Micah Hummel drums. Visit www.danwilensky.com for more info.

"I started teaching when I was 15. One day I got a call from a nice woman who asked me if I would teach her son, Joshua Redman, because his father, Dewey, was living in New York. Dewey Redman was one of my favorite saxophonists, and I was flattered, but felt like I was way in over my head. She insisted, though, and I gave Josh his first five or six lessons. I’m sorry to report that he had a short attention span, no apparent musical aptitude, and very little interest in the saxophone. What a difference a couple decades makes!"

Numerous gold and platinum records (for work on various hit records), 3 Emmys (for Between The Lions), Oregon Musician of the Month (December 2014), and a whole mess of other little statues, certificates and whatnot!

New Dan Wilensky Quartet Record: "Back In The Mix"

GOOD MUSIC: "There are only two kinds of music. Good Music and the other kind."

So said Duke Ellington, and probably a whole bunch of other people. Good Music is saxophonist Dan Wilensky's examination of music for music's sake, his unpretentious "serving the music" recording. Seven of the eleven tunes are chordless trio affairs, bringing—as a touchstone—Sonny Rollins' groundbreaking A Night At the Village Vanguard (Blue Note, 1958) to mind with its fearless flexibility and Wilensky's muscular and assured tone. Especially on the opener, George Gershwin's "S'Wonderful."

GOOD MUSIC: "There are only two kinds of music. Good Music and the other kind."

So said Duke Ellington, and probably a whole bunch of other people. Good Music is saxophonist Dan Wilensky's examination of music for music's sake, his unpretentious "serving the music" recording. Seven of the eleven tunes are chordless trio affairs, bringing—as a touchstone—Sonny Rollins' groundbreaking A Night At the Village Vanguard (Blue Note, 1958) to mind with its fearless flexibility and Wilensky's muscular and assured tone. Especially on the opener, George Gershwin's "S'Wonderful."

Guitarist Dan Balmer sits in on four numbers, including The Beatles' "And I Love Her." It is the mellowest take on the tune imaginable—Wilensky's tone full and rich, with Balmer spinning luminescent spiderwebs around the deliberate rendering of the melody. From the rock group the Youngbloods—Balmer sits in again— Wilensky offers up "Get Together," turning the pop tune into an ominous dirge, with the Balmer adding a near-orchestral, Bill Frisell-like backdrop; while the Pablo Beltran Ruiz composition "Sway" could inspire a rise from the listening chair, and a sending of the feet slipping into a saucy cha-cha.

The set closes with George Cates' "Adios, Au Revoir, Alf Wiedersehn," the Lawrence Welk theme song. Wilensky and company—including, on this one offering, accordionist Mike Danner—give the song a pastoral, lullaby feeling, a restive close to an inspired outing.

MADE IN PORTLAND: "Joyful … Soulful … Rollicking …. Memorable. Made In Portland draws upon Wilensky’s years of expertise, and features some of Oregon’s top local musicians. One soon appreciates why Polyglot is the name of the record label. There is no shortage of variety on this disc. Each of the 13 songs, including seven Wilensky originals and a free improvisation, has it’s own plot." – Scott Yanow 4 Stars in Downbeat (November, 2015)

You might initially be drawn in for the compelling new arrangements of “Lament” by J.J. Johnson, Cole Porter’s “Falling In Love With Love” and “Tenderly” by Gross and Lawrence, but you’ll keep coming back to Dan Wilensky’s fourth album as a leader because of its six original compositions — each of them a canny showcase for the Ann Arbor, Michigan native’s crisp individualism on the sax. – Nick DeRiso Something Else (2012)

IF YOU ONLY KNEW: . . . Wilensky's individuality can be heard with his first notes. His sound is bright, crisp, and completely relaxed in all registers. His lines are direct, to the point, and completely his own; he just does not sound like anyone else. – Saxophone Journal (March, 2011)

“A master class on composition, interpretation, performance, practice and repertoire selection . . . brevity, professionalism, structural musical competency, simplicity, humility and grace. . . . The title piece is a ballad of careful beauty that comes to a simmer and beyond. – All About Jazz (March, 2011)

MUSICIAN! (Book released in 2010): There really isn't a single page that doesn't have words of gold on it. — Tom Erdmann Saxophone Journal (2011)

I've been teaching saxophone, flute and piano for 40 years. Many of my students, including Joshua Redman, Craig Handy, and Chris Byars, have gone on to true greatness. All ages and levels welcome; music therapy; flexible hours; same rates as 1977!

Riveting and fun as all hell!

From: Back In The Mix
By Dan Wilensky

All About Jazz musician pages are maintained by musicians, publicists and trusted members like you. Interested? Tell us why you would like to improve the Dan Wilensky musician page.