Saxophonist Dan Wilensky--who has played with everyone from Ray Charles to David Bowie to Jack McDuff-- offered up his take on some familiar pop tunes (The Beatles, The Youngbloods), a touch of George Gershwin and some Sammy Cahn on his 2018 offering, Good Music (Polyglot Music). Now it is (mostly) all Wilensky originals, the result of a busy composing period that spanned the last two weeks of December 2019 the first week of January 2020, in which the saxophonist penned ...

“There are only two kinds of music. Good Music and the other kind." So said Duke Ellington, and probably a whole bunch of other people. Good Music is saxophonist Dan Wilensky's examination of music for music's sake, his unpretentious “serving the music" recording. Seven of the eleven tunes are chordless trio affairs, bringing--as a touchstone--Sonny Rollins' groundbreaking A Night At the Village Vanguard (Blue Note, 1958) to mind with its fearless flexibility and Wilensky's muscular and assured tone. ... 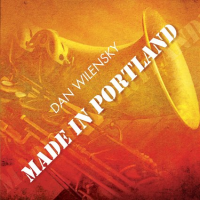 Relocating is never easy, but it would seem that multi-reedist Dan Wilensky has acclimated quite well to the musical climate of Portland, Oregon since arriving there in 2012. The latest release from this man-of-many-talents puts him in close quarters with a collection of that city's finest musicians, a crew that's ready and eager to tackle Wilensky's originals and put new twists on old favorites from artists like Cole Porter, Irving Berlin, Hoagy Carmichael, and, dare I say it, Neil Sedaka. ...

A Hollywood/TV industry musician who has performed on, or arranged for such programs as, The Today Show, David Letterman, The Tonight Show and several others, Portland-based composer and saxophonist Dan Wilensky is currently performing and teaching in Portland, from where he records his fifth album as leader on Made In Portland, offering eight fresh new originals and five covers including vocal renditions of songs from Irving Berlin, Charles Trenet and Hoagy Carmichael. As the album title indicates, the saxophonist records ...

Dan Wilensky: Back In The Mix

Thirteen years separated the release of tenor saxophonist Dan Wilensky's first two albums-- And Then Some (Speechless, 1997) and If You Only Knew (Speechless, 2010)--but the saxophonist wasn't sitting around idly during that stretch of time. Wilensky's work as a session player, touring musician, author, and educator kept him beyond busy, yet his own music suffered as a result. Thankfully, the saxophonist has been focusing his efforts on being a leader since 2009, and the resultant albums released since that ...

Tenor saxophonist Dan Wilensky possesses a warm, accessible tone on his instrument, and at first glance Group Therapy seems tailor-made to feature this broad, bluesy sound on ten straightforward compositions. However, less than two minutes into “Reckless Tongue," the album opener, the syrupy head breaks down into a standstill of rests and whole notes before sliding back into the relaxed groove that carries the tune the rest of the way. This brief moment of suspense perfectly encapsulates what makes the ...

Group therapy involves a collection of individuals coming together to work things out and sort through their thoughts in the same room. The same can be said for saxophonist Dan Wilensky's Group Therapy. Wilensky's wide-ranging career has involved everything from street playing and studio sessions to Broadway and a stint in Ray Charles' band. All of his experiences have helped him flesh out a personal sound that touches on everything from loose swing and free jazz to faux-Arabian fare.