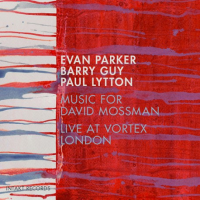 Spinning the latest release by the trio of Evan Parker, Barry Guy, and Paul Lytton brings to mind The Rolling Stones. Like the Stones, these musicians have been performing together since the 1960s, and seemingly every time they perform, they conjure a crossfire hurricane. This 2016 live performance at London's Club Vortex is no exception.

The musicians began this formal trio in 1980, initially releasing (the now out-of-print LP) Tracks (Incus, 1983). Fifteen titles and thirty-six years later, we still can get some satisfaction (an understatement) from their music. Even though it's only jazz improvisation, but I like it.

Like the Keith and Mick show, the trio's sound never grows old. The storm of activity they create is just as gripping and surprising each time they perform. This session, dedicated to the founder of Vortex, is no exception. Opening with the smallest of gestures, Guy's taut bass strings mimicking the insides of a piano and Lytton's rattle ticks on drum kit and cymbals, the flame is lit. Three-and-a-half minutes later Parker's saxophone wanders in like a drunken master, testing his balance against that of his partners. From this jumping off point, the trio builds momentum and their signature tempest of sound. The mesmerizing spell they spin with Parker's circular breathing patterns, Lytton's hyperactive percussion conversation, and Guy's plucked and bowed vibrations becomes a total immersive experience.