By Dave Wayne
November 7, 2011
Sign in to view read count 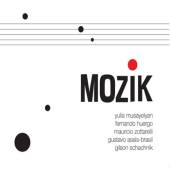 The quintet's two original tunes have a similar flavor—neither "Web's Samba" nor "Zelia," both penned by Schachnik, would have sounded out of place on an early Azymuth LP. Outwardly friendly and sunny, both tunes feature funky hard-hitting percussion and somewhat darker intervals that epitomize the Brazilian concept of saudade.

The quintet provides a contemporary take on three easily recognizable Jobim tunes—its interpretations nimbly straddle the line between slavish reverence and complete overhaul. Guitarist Gustavo Assis-Brasil shines on "A Felicidade," his clean tone, mind-boggling chops, and fastidious attention to detail suggest influences such as Mick Goodrick and John Abercrombie, though his harmonic and melodic ideas are completely his own. Zottarelli's drumming here is also remarkable, seamlessly blending funk, Afro-Cuban, and Brazilian rhythms in a particularly stimulating fashion.

The remainder of the CD is similarly engaging. The quintet's high-energy take on Hancock's rarely-covered classic "Eye of the Hurricane" gives Schachnik an opportunity to show off his Rhodes chops and Assis-Brazil a chance to demonstrate the high- energy aspects of his playing. Monk's "Pannonica," by contrast, gets a relaxed, samba-like treatment that suggests some of Jerry Gonzalez' Latin-ized Monk rearrangements.

Never veering off into smooth jazz irrelevance, or overly-abstruse experimentation, Mozik's music effectively, sweetly pays tribute to the salad days of Brazilian jazz without going completely retro. The quintet's music is both warm and intelligent, while retaining the sort of funky playfulness that some may interpret as an invitation to dance.