Emmet Cohen: In The Element

BY EDWARD BLANCO
November 7, 2011
Sign in to view read count 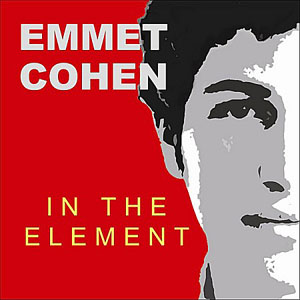 At the ripe old age of 21, jazz piano prodigy Emmet Cohen has already racked up an impressive list of awards among them, Downbeat's Best Jazz Soloist and Best Jazz Combo (for the Emmet Cohen Trio), placed first in the Kathleen T. and Philip B. Phillip's Piano competition at University of West Florida and was selected as a finalist for the 2011 American Pianist's Association's Cole Porter Fellowship. With In The Element, Cohen makes a brash and bold musical statement on his debut as leader, featuring bassist Joe Sanders and drummer Rodney Green. Playing the piano since the age of three, Cohen spent seven years studying classical piano and continues his studies towards a music degree under renowned jazz pianists and educators Shelly Berg and Martin Bejerano, at the University of Miami's Frost School of Music.

Musically mature beyond his years, the pianist displays the experience of a seasoned veteran with his playing and music. Cohen reveals sparkling interpretations of classics and the depth of his talents on a selection of standards from writers including Cole Porter, Rodgers and Hart, and Frank Foster. "Resentment (Without Reason)," "The Swarm," "Just Deserts" and the title track, are creative and technically intricate originals providing ample evidence of Cohen's skills as a writer.

Porter's "It's All Right With Me" serves as a warm-up of what's to come, providing only a measure of the artistic flair Cohen demonstrates throughout the album. The sophisticated "Resentment (Without Reason)" unleashes the lion within, igniting a powerful performance where a nimble-finger approach and command of the instrument are in play. The very same can also be said of his remarkable performance on "The Swarm," where the pianist employs a similar assertive style.

Veteran trumpeter Greg Gisbert—a Criss Cross artist and founder of the Convergence band—appears as special guest on "Just Deserts," Irene Higgenbotham's "Good Morning Heartache" and the finale, "3 O' Clock in the Morning." Cohen's title piece and his rendition of Foster's "Simone" (a feature for Sanders) leave little doubt that he is something special.

The young prodigy delivers an absolutely beautiful solo performance on Fred Coots' jazz standard "For All We Know," the album's only real ballad and one of its outstanding pieces. Cohen's charming In The Element captures an amazing young talent comfortable in a musical landscape that he masters like a virtuoso. Add his name to the short list of young piano lions of jazz that include Taylor Eigsti, Matt Savage, Eldar Djangirov and Briton John Escreet—all rising stars of note.

It's All Right With Me; Resentment (Without Reason); Where Or When; The Swarm; Just Deserts; Good Morning Heartache; In The Element; Simone; For All We Know; 3 O' Clock In the Morning.

Title: In The Element | Year Released: 2011 | Record Label: Self Produced