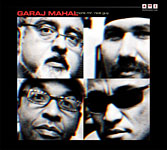 There is different, and there is distinct. Either can describe More Mr. Nice Guy by Garaj Mahal, although the latter is probably more telling. Several genres of music are mixed, matched and pushed around in this effort.

Funk meets India on "Witch Doctor." Composer Eckhardt plays a 1961 Fender "Precision" bass and a Coura Buru-Buru fretless bass. Haque plays Moog guitar, which sounds like a hybrid between a synthesizer and an electric sitar. And Levy supplements on Fender Rhodes and Hohner Clavinet. The piece has a late 1960s/early '70s feel. An uncredited scat bridges Haque's guitar solo and the main theme, which sets up Levy's solo on the Rhodes.

"The Long Form," penned by Haque, is a straightforward, instrumental rock piece, featuring the Moog guitar. Rickman is a beast on the kit during some of the more intense moments. The group mellows for Levy's solo, but the strength of this song is the hard-charging vibe. During some of the melodic sequences, guitar and bass share the lead voice.

Rickman composed and sings lead on "What My Friends Say," as well as plays rhythm guitar. The melody is rather laid-back, but the group morphs into a fusion mode during the instrumental break, which is highlighted by Levy's Moog synthesizer. Rickman engages some nicely syncopated rim shots during the melody.

More Mr. Nice Guy is an eclectic mix of styles and sounds that are familiar, yet different.