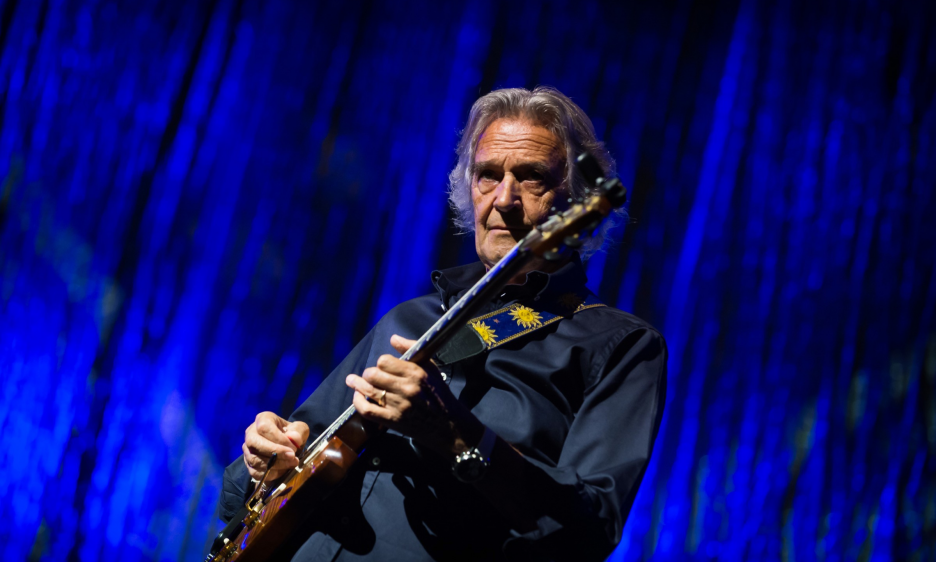 The obvious, burning question for Montreux Jazz Festival press officer Marc Zendrini, concerned plans for the Festival in 2021. He replied "We have safe possibilities for outside performance next summer, all along the lakefront. But for which artists, on what dates, with which airline? It's all too early to tell." The 2020 Montreux Jazz Festival was cancelled in April but the virtual version attracted eight hundred fifty thousand viewers to live performances curated from their extensive recorded film archives.

The Montreux Jazz Artists Foundation celebrated an Autumn of Music 2020, (this review covers the final four days) at the five-star Fairmont, The Montreux Palace Hotel. In a sumptuous room lit by a cut glass chandelier, nymphs and angels, cherubs and muses, variously held up the arch of the proscenium stage and large wall mirrors. This was not a jazz cellar.

China Moses, the daughter of Dee Dee Bridgewater and film director Gilbert Moses, gave a frank chronicle of her career in music, illustrated by film clips. Her mother supported her leaving school at sixteen for an unsuccessful contract at Virgin Records. Moses spent the next twenty years independently searching for her sound, finding her success in versions of the music of Dinah Washington, while hosting on MTV in France. It was not entirely clear whether her self deprecating, at times feisty, honesty was a cover for faults, or a counterbalance to the weight of parental fame. Either way, she learned her craft and became a working singer and presenter.

UBS bank supported the Swiss Talent Spotlight, a series of six concerts showcasing the best of emerging musicians. Julia Heart is from Lucerne where they speak Schweizerdeutsch, or Swiss/German. Heart had spent some months in Nashville, Tennessee soaking up the country music there, and extending the inherent blues influences into her music. She opened with an acapella piece while bass and lead guitars came onto the stage with a banjo player to complete their sound. Her spoken English was impeccable but singing the thick Tennessee accent with it's added syllables is not at all easy. The picked banjo, harmonica and flat vocal harmonies played off the blue notes to give an authentic country sound weighted towards blues. The story lines were lost, except for occasional snatched phrases. Heart had some nervous moments but they played convincingly together.

Gaspard Sommer is from French-speaking Geneva but, like most of his generation, he switched easily into English for announcements. He came onstage alone to sit at banked keyboards wearing white T-shirt and jeans, with a black beanie hat. His first piece began with a low hum, then notes trickled into a slow mournful melody, changing up to a fast section and on to an uncertain ending. In his second piece, "Les Couleurs Pastels," he again began low and slow, creating an ethereal atmosphere. Now we heard why Sommer had been chosen by the Montreux programmers. He has a rich baritone voice, which reaches high up, a full octave beyond the usual range, without ever forcing his voice. He sings his high notes, he doesn't force them. To his natural ability, add his technical expertise. He recorded a phrase live, playing it back and singing a counterpoint harmony to his own voice. The effect was startling in its size and power. Towards the end of the piece, singing against two layers of his own voice with a light reverb, he built up an organ crescendo beneath the title phrase which filled every corner of the grand room. The zenith of the crescendo was rewarded with well-deserved applause.

For his next piece "Le Sucre" (the sugar) Sommer was joined by an electric guitarist to add accents to his music. Sommer again used light reverb both to his vocals and the organ sound, giving a choral echo effect. Then came "STP" which is a familiar abbreviation for Please —s'il te plait—but Sommer explained his song title to mean—Si Tu Pouvais—if you would. STP(Colors records, 2020) is also the title track to his EP. Guitar accents were added to the soul groove to again make a haunting background for the extended range of Sommer's fine baritone voice. Displaying creative electronic music, an exceptional voice and a clear vision of melody as his aim, the performance easily deserved its applause.

Parisian percussionist Anne Paceo recounted her early years studying xylophone at the conservatoire then starting drums at 11 years of age. She has become a singer and band leader, having served her apprenticeship with a series of established French jazz musicians, including barefoot Hammond B3 organist Rhoda Scott, with saxophone players Sophie Alour and Lisa Cat-Berro in their Lady Band. Asked if her gender had influenced her decisions, she replied that she chose drums young, children don't differentiate by gender.

Dino Brandao gave an initially confusing presentation. Confusing because only one man was playing electronic keyboard, electronic and bongo drums, flugelhorn, two guitars and singing into two microphones. Concentrating on the rhythm clarified the intent, it was a bouncing reggae at varying tempi. His eccentric character and enthusiasm won him strong applause after he finished on a tune called "Pretty." Prune Carmen Diaz came to the stage with her guitar/keyboard accompanist, and together they sang in unison slow, often melancholy, repeating themes. Their compositions "Flight Simulator" and "Somewhere Someone is Taking Care" were powerfully defined, two voices in unison imparting an insistent chanted quality to the repetitive melodic pop.

Boris Blank of Yello came to the Autumn of Music presenting Point (2020). After making electronic music since 1979 with Dieter Meier he questioned whether this Point was the end, or the Point of no return. There was no music from the album but a collection of short film clips notably of a floating red cloth titled "Siren Singing." Seen in the audience was Michaela Maiterth, director of programming in the Stravinsky theatre and at the Montreux Jazz Club. The final evening of the Swiss Talent Spotlight series featured Kush K, Catia, Pascual, Paul and Nicola from Zurich playing their Indie-pop creations. "Long Time No see" seemed apt in the current situation, the lyric "can I call you my friend" a lonely cry. Softened by the gentle voice of the lead singer and by phrases on the flugelhorn, the rock was not hard or sharp, simply pop.

Adriano Koch studied jazz in Lausanne and stepped alone onto the stage to take his place at the Yamaha piano. Around his bench were arrayed a series of computers and technical equipment. A low rumble signalled the start, then he began to play. Influences of eastern music, shades of Erik Satie, flourishing chords, and a clean clear delivery of concert standard left the audience spellbound and silent. Holding the melody with his left hand, he half turned and struck a mallet on the electronic drum causing a bright white uplight to repeatedly illuminate him on the blacked-out stage. The drama was intense, the piano was augmented by increasing rumble and cymbal sounds as grandiose phrases rolled out. Koch played the title track from his self released album Lone(March, 2020). Synchronised lighting in single color splashes followed the music exactly, ebbing to leave the stage black. Then he sang " I Don't Know Yet/I'm Alone Now." When the piece came to an abrupt stop, the stage went to black and the music left a void. Was that jazz, electronica, classical crossover? Who knows anymore? What is certain is that the piano was played with classical elan, supported by minimal electronic interventions, staged with dramatic lighting and completely integrated into one whole performance. Adriano Koch turned twenty-one this year, remember his name.

Throughout the week, mentors Justin Stanton Michael League and Bill Laurance from Snarky Puppy, with Anne Paceo and master guitarist John McLaughlin, worked together with younger musicians to create new music. Those compositions were played in a final concert. The first was by singer Afra Kane, who was the winner of the soloist Montreux Jazz Talent award. The second "Cyclique" was written by drummer Arthur Hnatek. G Mireille Merk from Germany played guitar and composed "Camel" with arabic sounds picked up by John McLaughlin playing riffs back and forth with her. "No Pain, No Gain" featured Afra Kane, and they went out with "What Now," written by tenor saxophonist Andrew Neil Hayes from Bristol, who won the best band award in 2019 for his work with Run Logan Run. The final concert of the week on a crowded stage was filled with goodwill and good music. Montreux always takes a wide view of music, a valuable point of perspective.