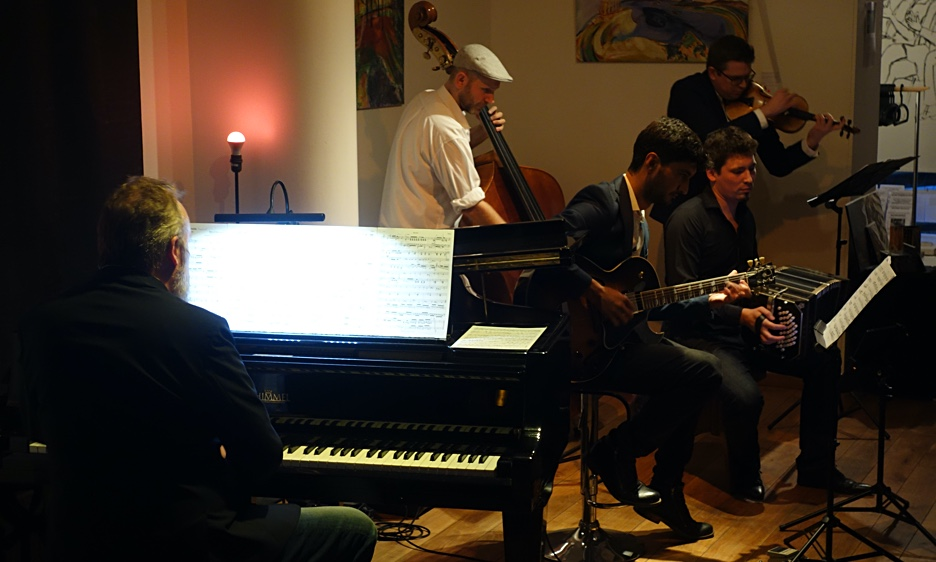 
Naima Joris is probably best described as a singer, her voice being the absolutely dominant aspect of each song, but she's also a complete multi- instrumentalist, selecting from soprano saxophone, keyboards, acoustic guitar and a variety of percussion tools. These included clay pot, tambourine, shaker and mouth-pops. Lightning-minded looping allows her to construct each number, and she could easily act as a completely solo performer. Even so, Joris is often found in a duo with bassist Lara Rosseel, but here at Het Huys she debuted a team-up with electric guitarist Vitja Pauwels.

This was a 4pm set at this modernised Flemish community centre in the Brussels suburb of Uccle. There would be another free admission show in the evening. The afternoon gig wasn't so well attended, but still looked well-populated due to its spaced-out virus measures. The location is a fair distance tram-ride from the Brussels centre, but it was an absolutely justified decision to attend this excellent gig by an unfamiliar artist.

Joris has guested with her father, the percussionist/pianist Chris Joris, and was also a member of the rock group Isbells, but the concept of a solo trajectory has only evolved in recent times, which is surprising given her highly individualist delivery. The set-list was assembled from a selection of original material (sung in English) and interpretations of Mexican, Portuguese and Cape Verdean songs.

Joris mostly sings low and fulsome, with expert control and maximum intuitive phrasing. It's clear that she's heavily orientated towards improvisation, dangling over the unknown abyss of makeshift casualness, looking like she's momentarily making decisions over which route to pursue, to create the pleasurable tension of unpredictability, and the adventure into unknown unwinding. She's not not afraid to reveal a flustered uncertainty, but once a song gets underway, it's realised with complete authority. It's unusual to experience this approach within the song-form, rather than in the arena of free instrumental music.

Guitarist Pauwels probably had a tough time navigating this spontaneous terrain, but following a subdued beginning, he offered a few solos later on in the set that were totally in keeping with its stance, with one outburst utilising a loop-captured siren repeat whilst he laid out angular phrases on top. Joris picked out bass parts on her guitar, or gave short but expertly shaped soprano solos, also making beats via simple looped percussion repeats, several times with vocal clicks or booms.

She floated up to Neil Young's "Harvest Moon," and drifted with melancholy grace through Cesária Évora's "Sodade." Then Joris unveiled the lesser- known (to your scribe) "Cucurrucucú Paloma," by Tomás Méndez, and a fado number called "Gaivota," associated with Amália Rodrigues. The Joris originals maintained and magnified the aura of morose yearning, lightened by her ironic and absurdity-loving presentation between songs. The supreme example of this was when Joris emerged for an encore sporting brightly flashing glasses, cracking jokes, but then swooped down into a chilling reading of "Strange Fruit," one of the most challenging songs to interpret in any time or any genre. Not many artists could have succeeded, but Joris gave one of the best, and most sombre and stark interpretations, ending the set in a strangely downer manner. Just one of her many wise choices throughout the performance.


Around two hours later, back in the centre of Brussels, the Art Base venue presented Sonico, a local ensemble devoted to the modernised tango music of Argentina. This joint is just across the street from the Belgian Comic Strip Center, and has the character of an intimate art gallery, but is also heavily devoted to music. Small tables were spread around the space, with wine, beer and Greek spirits being vended. The amplification was just at the right level, and the audience was arrayed at small tables in front of the players, drinking in the warm acoustic ambiance.

Sonico will be enjoyed by devotees of Astor Piazzolla, but their mission is to celebrate the compositions of his more obscure Buenos Aires contemporary Eduardo Rovira, who was also an arranger, bandleader and bandoneon player. This was the release show for Sonico's second album, Eduardo Rovira: Inédito e Inconcluso (El Intango Records, 2020), in the 40th anniversary year of the composer's early death. There's only a lone Belgian in the band, pianist Ivo De Greef, with the rest of the line-up arriving from France, Argentina itself (two of them), and the USA: Lysandre Donoso (bandoneon), Camilo Cordoba (guitar), Ariel Eberstein (upright bass), and Stephen Meyer (violin).

Sonico began as a guitarless quartet, piano pert whilst the bass scooted around, liberated, light and nimble. An early jewel was translated as "Tango For A Lonely Man," penned by Roviro for himself, and just the beginning of the set's misery-run, suitably lugubrious. A composer's suffering can frequently lead to an audience's shivered pleasure. The music made a deeply interior glide, navigating depopulated partitions, leaving a slug-trail of glistening doom.

De Greef left, and Cordoba joined, the piano and guitar refusing to mingle, initially. Then, there was a trio work for guitar, bandoneon and bass, "The Debris," written pending a visit to the psychiatrist, and not surprisingly, a funereal dirge that sounded like a radically slowed "I Put A Spell On You." Meyer fiddled while the virus burned. All five Sonico members were featured on "Solistas," from the new album, at times initiating phenomenal group surges. In the end, they encored with an actual Piazzolla number, from way back in 1961. The only word to describe Sonico's performance is 'exquisite...'


On the final night of the four-day Alles Es Just! festival, there was a single-set gig by the Dutch-speaking trio Schroothoop (meaning 'scrapheap' in English), in yet another one of the abundant cultural centres around the city. De Kriekelaar is in the Schaerbeek district, to the north-east of Brussels central. It presented most of the music, eating and drinking during this local festival.

Schroothoop are a reasonably new outfit, but they are quickly spreading their word through frequent gigging, even during this virus-season. Their roots lie in the perambulating brass band, La Clinik Du Dr. Poembak, but their present concept is to perform using self-fashioned instruments that use recycled materials. The trio scurry around a lot, picking up different blowing, plucking and hitting devices, but Rik Staelens mostly favours flute or trombone equivalents, Timo Vantyghem spends a lot of time sitting with his bathtub bass, and Margo Maex almost entirely perches at her very individualist percussion kit.

Schroothoop's tunes hint at traditional sounds from Ethiopia, Morocco, Zimbabwe, Nigeria and beyond, as well as their pvc/wood/metal homemades looking similar to the kraar (harp), qraqebs (metal castanets) and mbira (thumb piano). They also hurl in a healthy dub weight, subjecting this folkloric matter to the organic mixing desk of the head. Schroothoop's set was very similar to that played at the mini-version of the Gent Jazz Festival in July, but with greater volume punch, and a moodier atmosphere, lending an ensnaring pulse to their partially rickety approach, building up the substantial bottom layers.