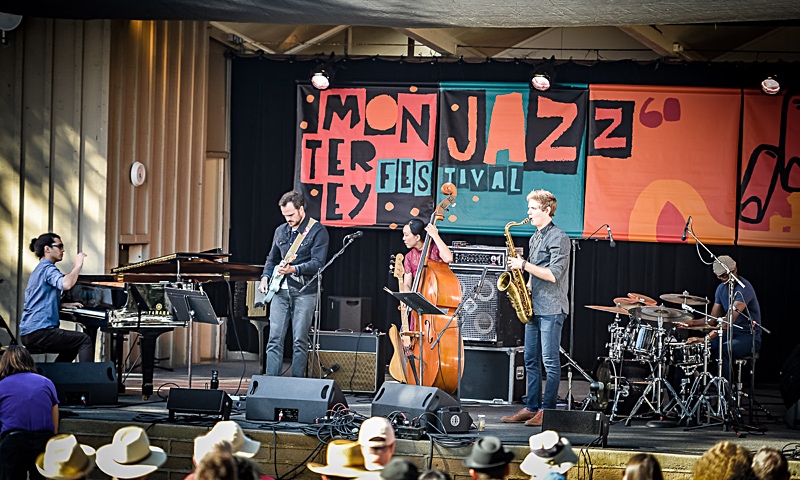 A Feast of Tributes, to Itself, Included

The distinctly stunning California outpost that is Monterey has been in the news, and making cultural history, in various ways this year. Over the summer, the 50th anniversary of the Monterey Pop Festival was duly noted and feted with a special commemorative festival. Over in the realm of the tube (the New, Improved TV landscape), the dramatic Limited Series Big Little Lies—set in Monterey, though with liberal creative license in terms of veracity to the reality of the place—ushered the city and its inviting ambience into America's living room. And, last but most importantly, on the very night that series was garnering a handful-plus of Emmy Awards on Sunday night, the grand and glorious Monterey Jazz Festival was on the last day/night of its milestone 60th anniversary edition.

The historical aspect of this year's jazz weekend in Monterey was not at all lost on the inspired and long-standing artistic director Tim Jackson, possibly to a fault. This was a weekend chockablock with tribute programs to bygone or otherwise absent legends who have graced the festival's Arena stage, including the opening act of Regina Carter's nod to Ella Fitzgerald, which actually involved inventive new arrangements, as part of her new Ella-homage project, Accentuate the Positive. Carter may have slyly made a political statement in this otherwise mostly socio-political reality-avoiding weekend, pointing out the pressing message of the mantra-like lyrics in the Ella-popularized "Accentuate the Positive:" You've got to accentuate the positive/Eliminate the negative/Latch on to the affirmative/Don't mess with Mister In-Between." "We gotta' live by those words more than ever," Carter told the arena crowd, with a hint of a grin.

Later that Friday night in the arena, we heard a tribute to past Monterey regular Dizzy Gillespie (a program with the eminent and ever-hip pianist Kenny Barron at the center, with trumpeters Roy Hargrove and Sean Jones and percussionist Pedrito Martinez), to a saxophonist-featured tribute to Sonny Rollins. There, the horn spotlight went to Rollins admirers and proteges Branford Marsalis, Joe Lovano, Joshua Redman, and a moving "Round Midnight" by Rollins peer Jimmy Heat, on soprano, with all aboard for a round of "St. Thomas."

Saturday night featured a welcome return by the great vocalist from Benin, Angelique Kidjo, but this program was a tribute to the inspiration of salsa music, generally, and her hero thelate Celia Cruz, specifically (with percussionist Martinez again in the fold). Even Dee Dee Bridgewater's strikingly powerful new project (and persona), linked to her new album Memphis... Yes, I'm Ready, is a tribute of sorts—to the great vintage soul music she listened to, coming out of the station WDIA in her birth city of Memphis. The record, and her powerful live show (especially killing it on "Try a Little Tenderness" and an encore of "Purple Rain"), validates yet another aspect of this master vocalist's range—of style and musical aplomb. But her super-tight Memphis-based band is put in the position of being basically a stellar cover band.

Echoes of and genuflecting to the past was a trend that kept rolling onto the Monterey Fairgrounds, to the point where the present tense and new musical energies in jazz seemed sorely wanting this year. Generally, a hallmark of the artistic success of the Monterey Jazz Festival, especially during director Jackson's long and inspired guidance, has been the delicate balancing of satisfying the many contingencies of jazz fans and old school festival-goers. Avant-garde music and other musics of the "now" have been craftily woven into the programming fabric, but not so much this year. It was a time, for nostalgic reflections, upon the turn of age 60. This is arguably the world's oldest continuously-run and contiguously-placed jazz festival, although the more roving and on-off again Newport jazz festival narrowly preceded and inspired the festival that founder Jimmy Lyons built.

By the time Vijay Iyer's uniquely dynamic sextet, riding high off its newly-released cerebrally high voltage album Far From Over, played the final late Sunday night show at the Dizzy's Den venue, the band's fertile mix of intellectuality and visceral, grab-your-sternum energy felt like blessed relief from the nostalgia floating around the compound that weekend. (Interestingly, while I heard Iyer's sextet twice at festivals this summer, in Ojai and Molde, Norway, with powerhouse-ing drummer Tyshawn Sorey, the band in Monterey, with Marcus Gilmore in that seat, supplied a steadier pulse, straightening out some of Iyer's thorny rhythmic patterns and juicing up the innate groove element in the music—and possibly making it more accessible to some ears).

Earlier in the day, another blast of fresh creative intensity hit the Garden Stage in the form of Linda May Han Oh's fine quintet, working with music from her latest album, Walk Against Wind. Oh (the Malaysian-born, Australia-raised bassist-composer-bandleader, who only recently expanded her name from the former Linda Oh), has appeared in Monterey before, as the bassist in the Joe Lovano/Dave Douglas-led band Sound Prints, and also as part of Pat Metheny's latest band.

But to hear her own music here, and to witness the maturation of her musical concept as a leader/composer, made for one of the few new musical revelations of the weekend. The band featured the impressive youngster-to-watch Ben Wendel on tenor saxophone, seasoned drummer of ever greater importance Rudy Royston, pianist Fabian Almazan, and nimble guitarist Matt Stevens (fresh off his publicly-exposed work on Esperanza Spalding's 77 project, in which she and her bandmates created a 10-song album from scratch in 77 hours, streamed live from the studio for all to watch on her Facebook page).

One of the most inspiring programming features of the 2017 was a family affair and focus of the sweetest and deserving kind. Pianist Gerald Clayton, one of the festival's artists-in-residence, appeared multiple times, and with just the right approach in each setting. His own captivating trio (with drummer Obed Euman and bassist Joe Sanders) put on one of those ear-catching sets teeming with contemporary ideas and a strong ensemble identity during this festival, and the trio itself was the core of the Saturday night commissioned piece, by Gerald father John Clayton, and his mighty, polished Los Angeles-based Clayton-Hamilton Jazz Orchestra. Clayton the Elder's fine new suite, aptly entitled "Stories of a Groove," shifted easily between the melodic sheen and big band-savvy the leader is known for, with some nods to his son's personal voice as a musician—and as one of our most promising young pianists, plugged into the moment as well as steeped in the tradition.

There were plenty of other bold moments to be taken in around the grounds on this weekend. The newly-named Pacific Jazz Café, an expanded variation on the former, piano-featuring Coffee House venue, hosted powerful and poetic sounds from the great and still-underrated pianist JoAnne Brackeen (although her NEA Jazz Master award was a comforting accolade) and saxophonist Joel Frahm, riding high atop a stellar band, with pianist Billy Childs, drummer Peter Erskine, and bassist Scott Colley.

Down at the Night Club (venue), the fast-rising Kandace Springs-the Prince ally/protégé who made a splash with her Blue Note debut this year—amply demonstrated her dominant skills as keyboardist, vocalist and magnetic presence who is finding fresh and valid artistic magic at the juncture of R&B, jazz and other styles, done up in her own style. Brad Mehldau and Chris Thile's duo, in the arena, was "jazz" only to a degree, but more a case study in two versatile virtuosos bending towards the light of the other's musical energy. And Hamilton-fueled singer Leslie Odom Jr. flexed his admirable Nat King Cole-ish musical powers, warming up the cool evening even if fragilely straddling some line between jazz and theater.

Given the density of the Monterey festival grid, spread out over multiple venues on the grounds, with the vast arena stage and schedule centering the weekend, it can be tricky to catch as much as one would like. But it's possible, with some creative planning, catching half a set here, another half there, and fast footwork on the property—and avoiding the temptation to stop to eat BBQ along the way. At the tail end of Sunday night, for instance, discerning listener had was caught in a quandary: whether to catch Iyer's sextet, one of the most important current jazz projects on the scene, and presently on fire, or check in with two seasoned masters, Herbie Hancock and Chick Corea in one of their rightly-famed piano duet shows. After a half hour of Iyer's jolt juice, I raced over to catch 40 minutes of the Herbie-Chick encounter, which was nothing short of brilliant and a wonder in constant motion and evolution. Even when dealing with the Cole Porterville of "Easy to Love," or the onstage artist's "greatest hits" "Cantaloupe Island" and the inevitable "Spain," the pianists spun a web of constant invention and intricate call-and-response with each other, never giving in to rote expressions or easy to love showboating.

They were creatively alive and very well, alert to the moment, nodding respectfully to history while making history, all at the same time. It was, in the end, a classic Monterey multi-moment.