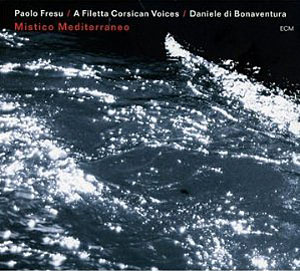 At a time when cross-pollination has become the new musical evolution, ECM Records remains at the vanguard. Whether blending music of Tunisian origins with European impressionistic concerns and hints of New World groove on oudist Anouar Brahem's The Astounding Eyes of Rita (2009), or marrying Persian percussion with Baroque instrumentation and Fourth World improvisation on keyboardist Jon Balke's Siwan (2009), few labels (if any) can boast such an impressive catalogue of constant innovation, where unfailing respect for tradition is matched by an equal disregard for the hard-coded conventions that seem, on the surface, inherent to its very definition.

Mistico Mediterraneo follows in the footsteps of Jan Garbarek and The Hillard Ensemble's (so far) trifecta, including Officium Novum (2010), where the saxophonist and classical vocal group turned eastward, further enriching an improvised language they've honed for nearly two decades. But as a collaboration between trumpeter Paolo Fresu, Corsican vocal group A Filetta, and bandoeonist Daniele di Bonaventura, the roots of Mistico Mediterraneo—and its ultimate destination—are inherently different. Rather than looking to an extant classical repertoire that crosses not just centuries, but millennia, Mistico Mediterraneo's song cycle is of distinctly contemporary origins, though the polyphonic tradition at its core dates back to the 9th century. The music may sometimes feel of timeless antiquity, but hints of modernity abound, as in French film composer Bruno Colais' "Le lac," where Fresu's electronically treated horn creates a near-ambient soundscape, over which di Bonaventura's bandoneon evokes a rippling, Steve Reich-ian pulse before A Filetta enters, with a plaintive chant revolving around a repetitive, descending three-chord pattern.

The bass-heavy A Filette—now led by Jean-Claude Acquaviva who, joining the group at 13, has since become its primary composer, contributing five pieces to this program—brings a different vocal tradition to the table than The Hilliards, one as steeped in the folk tradition of its locale as it is a classical one, blending sacred and secular texts sung in French, Corsican and Latin. Above it all Fresu, a trumpeter with his own deep roots in the jazz vernacular of Chet Baker and Miles Davis, intertwines with A Filette's seven voices, while engaging with di Bonaventura—surely the European answer to South American bandoneon master (and label-mate) Dino Saluzzi—on a profoundly interpretive level. This sublime combination of voice, horn and reeds is particularly effective on Jean-Michel Giannelli's "Dies Irae" which, despite its Latin text and cascading voices, somehow feels cousin to bassist Charlie Haden's often-covered "Silence."

Mistico Mediterraneo has something else that Garbarek/The Hilliards don't—a pulse. Tracks like "Gloria," with di Bonaventura's propulsive, ebb-and-flow rhythm supported by A Filette's similarly driven delivery, meet modernity with the timbral oscillations of Fresu's horn, while the all-vocal miniature, "La folie du Cardinal," would be relentless if it weren't only a couple minutes in duration. It all comes together in a recording that might be compared too quickly to Garbarek and The Hilliards' ongoing collaboration, but with music at least partly rooted in more temperate locales farther south, the superb Mistico Mediterraneo sings with a resonant collective voice all its own.