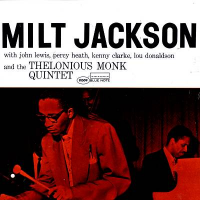 And now, a crossroads: At what price do I pass?

It's the dilemma all collectors face eventually. At first, you buy the commons. A used CD at $4 is a no-brainer. A new CD at $10 or $12, easy to justify. But what do you do when the easies are gone and the price makes you think twice?

I've reached that point. My mission is to collect all the Blue Note CDs in the classic 1500 series. For stubborn, stupid reasons, I've decided to do this chronologically. So I started with 1501 and worked my way forward.

The first bunch was easy—Miles Davis, Bud Powell, J.J. Johnson, Art Blakey, Thelonious Monk. (I did skip ahead a little to get Thad Jones' Detroit-New York Junction. I just liked the title.) And now we reach a decision point: Milt Jackson—the man and the CD.

It's not rare, but not exactly common either. Used CDs are $15 and up, for reasons that totally escape me. Amazon lists 44 copies, so it's not hard to find. At $15, I can sleep OK. In the old days, that was the cost of a new CD. Fair enough.

But soon, I can already see, some rares are coming. Some are $25, some $35. That makes me hesitate. How badly do I want Jutta Hipp's At the Hickory House? Gil Melle's Patterns in Jazz? I dunno, but I'm about to find out.

And then there's the record. More like two records, really.

First, the band that eventually became the Modern Jazz Quartet: Jackson, pianist John Lewis, bassist Percy Heath and drummer Kenny Clarke... plus Lou Donaldson. It's not the MJQ yet, but the seeds are there. Cool vibes, a couple of sedate ballads, a boppish toe-tapper, and the classic "Bags Groove." Very nice. Very conventional.

Walk out, come back—and now for something completely different. Thelonious Monk with Jackson, bass and drums. What the...? Jackson always the smooth bopper, but Monk behind him, all elbows and awkward pauses and odd chords. They almost don't fit together—the cool cucumber and the weird piano plunker. It works, but it sure ain't the MJQ. It's funky, and a little funny, too.

Makes you wonder how they ever got together in the first place.

Availability: Many copies on Amazon, but oddly expensive