Home » Jazz Articles » Mike Clark: The Drummer Gets (And Gives) Some!

By Doug Collette
September 10, 2021
Sign in to view read count
Drummer Mike Clark must've already had some estimable pedigree in the first place to be invited to join Herbie Hancock's seminal funk/fusion ensemble Headhunters back in the Seventies. But the man at the kit only built upon his existing prestige during his tenure with that group and then went on to expand upon his rep with a variety of solo projects. In doing so, Clark was hardly a journeyman musician, but he ranged far and wide enough to satisfy an appetite for diversity that included live work with the Meters' George Porter Jr. as well as records with guitar wunderkind Charlie Hunter, Actual Proof (Platform Recordings, 2000), and Summertime (Jazz Key Music, 1999), where he led an all-star band featuring pianist Billy Childs and saxophonist Chris Potter. Two recent releases on which Clark appears hew to the traditional jazz end of the spectrum and while he is not the sole leader on either session, he makes his presence felt in his own inimitable way, 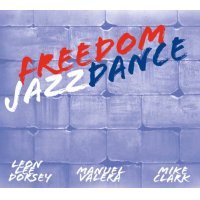 The very name of Freedom Jazz Dance hints at the crossover phenomenon in which Mike Clark played such a pivotal role in nurturing nearly a half-century ago. But this collaboration of bassist Leon Lee Dorsey, pianist Manuel Valera and the esteemed drummer angle toward the hyphenated pop hybrids more than jazz-rock fusion, hence the juxtaposition of Eddie Harris' titlesong with the bonafide standard "Autumn Leaves." Interspersed with Dorsey originals and Jobim's "How Insensitive" for good measure, eight tracks and forty-odd minutes seems like a pittance of time for this threesome to spend in their navigation of style. Yet they play with as much focus as elasticity, seeming to all solo and never solo (much as the late Joe Zawinul described the interplay of Weather Report). Radiating an unassuming air that belies its deceptively conventional approach, not to mention the implicit kineticism of the album title, the musicianship is replete with an uncommon clarity and nuance throughout. 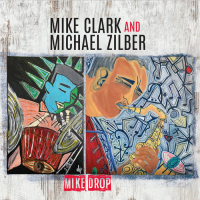 A mix of material no less potent than on its companion piece, a pair of tunes by The Beatles, "Blackbird" and "Norwegian Wood," reside next to work of two piano icons McCoy Tyner ("Passion Dance") and Thelonius Monk ("Monk's Dream"), the flavorful combination of which becomes further seasoned by Rodgers and Hart's "Falling In Love With Love." The foursome Mike Clark co-leads here with saxophonist Michael Zilber certainly makes the most of the varying rhythmic and melodic possibilities that abound within the various tunes, allowing each member to embroider upon the changes, often beyond what might be construed as the conventional confines of their respective instruments. The individual and collective relish is as notable as the pure technical skill though and the unified sense of purpose render transitions as fluid as they are spontaneous, turning the nine tracks in this near hour duration into what is, for all practical purposes, a single (and singular ) piece of music.

Tracks: Barshay Fly; Sonny Mink (If I Were A); Passion Dance; You Know I Care; Blackbird; Norwegian Wood; Myako; Monk's Dream; Falling in Love with Love.