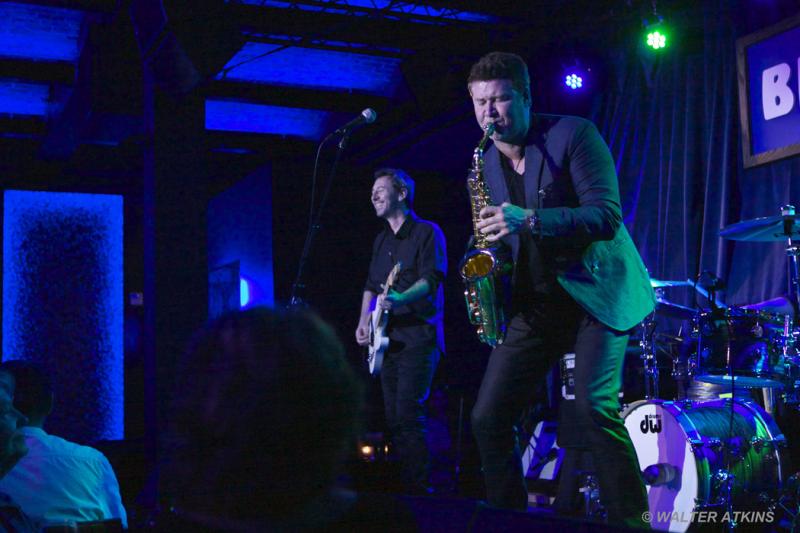 Opened on October 25,2016, the beautiful blue hued BNN is located downtown in the national landmark Napa Valley Opera House. The original Italianate style building was constructed in 1879, and under went a multi million dollar renovation completed in 2003. The warm and cozy spot offered clean sight lines, tasty food and world class wines. Managing director Ken Tesler and his attentive staff had created a very relaxed environment for the room. According to their website—"Blue Note Napa is a live music jazz club/gourmet restaurant venue occupying the first floor of the historic Napa Valley Opera House. The Blue Note Napa seamlessly blends the quintessential Greenwich Village jazz club experience—an intimate atmosphere where the stage is so close to you that you feel as if the performers are playing in your very own living room—mixed with the Northern California wine country ambiance..."

BNN provided an enticing venue and the capable Lington band took full advantage of it. Lington played with alacrity throughout the night fully supported by his stage mates. The group opened with "Uptown Groove" and "Taking Off." Lington talked about how his friend and drummer Dave Hooper filled in at the last minute with only two days rehearsal. He was rewarded with a long and powerful solo for his efforts. As part of a Beatles song project, the saxophonist was assigned "Eleanor Rigby," which was not one of his Fab Four favorites. However, he rose to the challenge and made his version surprisingly interesting. "He nonchalantly slipped in some riffs from Deep Purple's rock classic "Smoke on The Water" and some other musical references. A nice twist. When finished, he said with a grin," Thought you were here for a jazz show." During the gig, he also serenaded appreciative fans in the front row.

Lington shared his story about receiving a phone call from Barry Manilow, who asked him to open for him and Kenny Loggins. In between tracks, he talked about his fondness for the CTI record label, and it's great roster of artists including Patti Austin, George Benson and Bob James. While growing up in Denmark, he also listened to the soulful, funky Memphis sounds and multi genre encompassing saxophone virtuoso/band leader King Curtis. He celebrated the legendary Sam Cooke, Sam & Dave, and other classic Stax and R&B artists. With a sense of devotion, Lington discussed traveling to Memphis Tennessee for recording his "Nature" album. The revered Booker T. Jones was featured on the first single, "Beale Street."

The comfortable musical interplay among the artists was enjoyable to watch, and skilled band members relished the opportunity to solo. All the musicians were given abundant room to stretch out on stage and off. Lington asked the audience, "Are you still with me? Let's turn it over to our bassist, Darryl Williams." He deftly worked through the aisles playing snippets of the Ohio Players' huge '70s hits "Fire" and "Roller Coaster." On "Beale Street," Lington's ebullient playing and strong tone clearly came through. For the poignant "Everything Must Change," Lington delivered with serious conviction. "One of my all-time favorite songs," he added. Up next, the band performed "Road Trip," co written with his friend Brian Culbertson, musician and founder of the Napa Valley Jazz Getaway. The invigorating night's encore was "Pick Up The Pieces," released in 1974 by the Average White Band.

Three customers visiting from the Midwest thought the show was "great." Antoine Casanave, a San Francisco Bay Area marketing consultant, was in the house to hear his buddy and also enjoy his birthday. "Michael Lington gave a truly incredible performance Saturday night at the Blue Note in Napa. Such a great performance in an intimate, beautiful venue. I brought my mother and father out to celebrate my birthday. It was a birthday that we'll certainly cherish for a lifetime." He later posed with Lington after the show.

Spirited saxophonist Michael Lington and his feisty band presented an entertaining evening of hip contemporary music fueled by classic Memphis/Stax soul power at the welcoming Blue Note Napa. All the contented club customers merrily strolled into the pleasant wine country night. The show was definitely worth the drive up from the Bay Area.

Post Script: This concert was covered the night before the massive Northern California brush fires started. We wish all the families and friends affected by the devastating wild fires in NorCal's Wine Country a safe and speedy recovery.

Ken Tesler, BNN stated: "As the smoke clears and the fires are being contained, we are working very hard to re-open our doors as soon as possible, welcome back the community and visitors, and remain #NapaStrong and #SonomaProud."

All of us here at Blue Note Napa want to express our sincere condolences to the residents of the Napa/Sonoma areas that have been affected by this devastating disaster, and we are thankful for the outpouring of concern from our friends and family, artists, and patrons. We are forever grateful to the heroic First Responders, both local and those from around the country, who battled day and night, and in some areas, continue to do so."