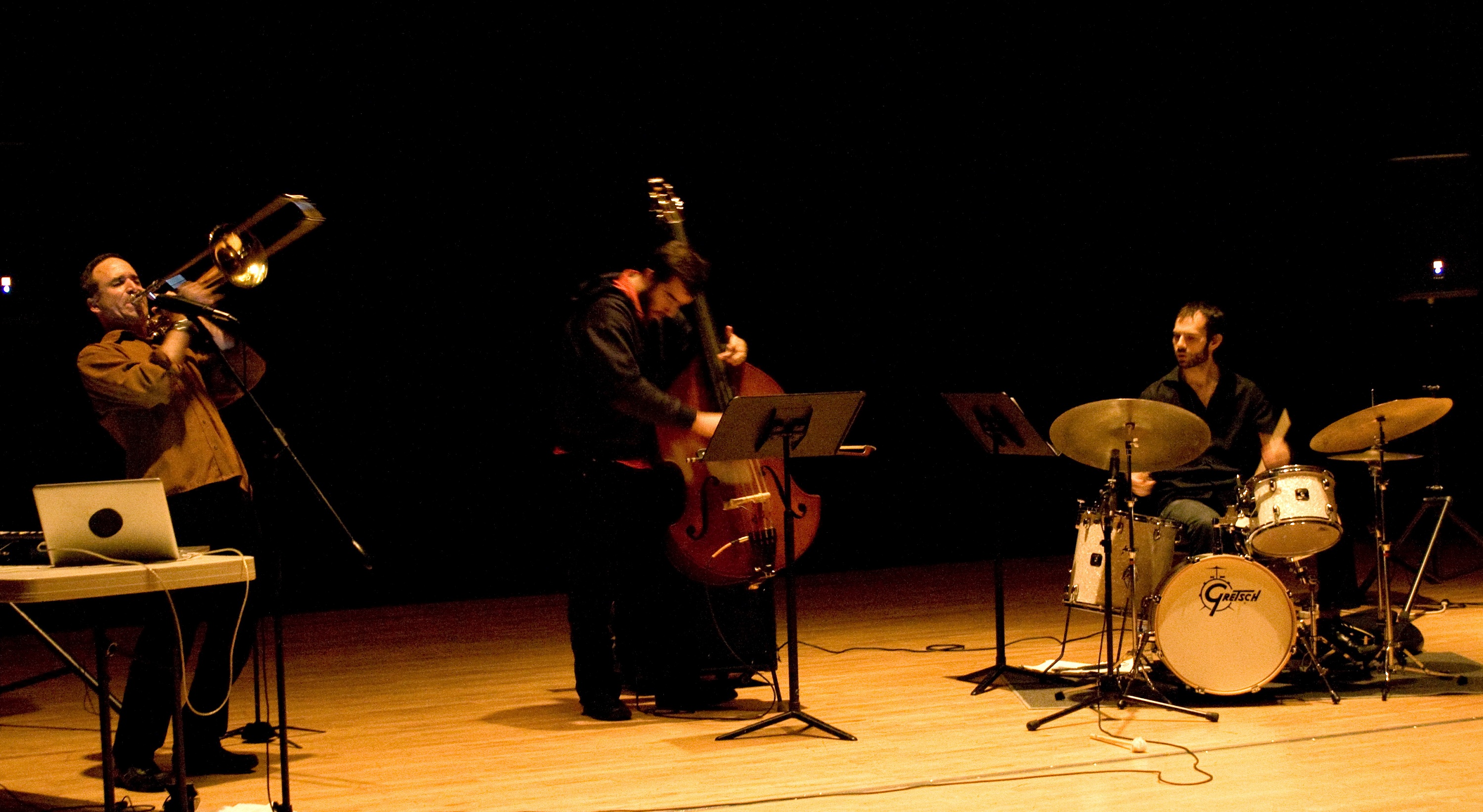 Michael Dessen is, according to a frequent employer, the contrabass virtuoso Mark Dresser, "a black-belt trombonist." He is, in fact such a consummate sideman in so many contexts that the opportunity to hear him as a leader is a rare treat, indeed.

Dessen was able to bring his NYC trio-mates out for this concert : on double-bass, the phenomenal Christopher Tordini, who plays with saxophonist Greg Osby and trumpeter Jeremy Pelt; and percussionist Dan Weiss performs often as a leader as well as an integral member of groups led by Ravi Coltrane, Rudresh Mahanthappa, and Chris Potter.

The trombonist chose a challenging format for this concert: a 70 minute suite of seven separate movements. Dessen's music is so fresh and innovative that there are few precedents with which to compare it. He does not use chords and harmony in any traditional sense, yet there was a deep harmonic connection between the trombone and bass for every note and idea transmitted.

A post-concert examination of the charts revealed a piece with 10 different time signatures in the first 10 measures. However, the music was played as if there was a single unifying pulse that tied all of these seemingly odd meters together. Dessen doesn't try to make intellectual music that glorifies complexity; rather, he writes down what he hears. What Dessen hears is striking and organic, and new in the most literal sense.

The concert opened with "Fossils And Flows," a piece referencing the disastrous BP gulf oil spill. Appropriately enough, the composition started out with a violent outburst of trombone bleats and blats over Tordini's muted harmonics and pedal tones. Weiss tattooed a wicked ride cymbal beat against his own Elvin Jones-ish cross-sticking on the snare and tom-toms. Dynamics were one of this group's strengths, Dessen dialing up the volume for a moment and seconds later drawing down to a hush, his band mates never failing to match his intentions.

The trombonist's music also blurred the divide between written and improvised material so seamlessly, that it was impossible to hear it in the traditional "head-solo-head" format, because that was not what was happening. Dessen appeared to veer from the melody for short stretches, then suddenly bass and trombone would be playing in unison. This went on for long periods of time, and after awhile it stopped mattering what was written anymore. Tordini soloed next—a fascinating mix of short declaratives mixed with ringing harmonics and overtones. There was an abrupt return to the melody and, suddenly, the quiet rim-shot chatter accompanying the bass became its own focus, as Weiss emerged with a complex solo that built to a thunderous climax.

Dessen integrated electronic soundworlds from his laptop, throughout the evening, to great effect. It was never overpowering, instead becoming an important additional element with which the trio could blend. The trombonist sampled some of Weiss' cymbals, then looped them back into the group improvisation. He then began soloing at length, and he demonstrated his golden-pure base tone, which he then manipulated in multiples of both subtle and dramatic means.

"Three Sepals" followed, beginning as a delicate duet of trombone and bass. Tordini alternated between short, open-string ostinati and doubling the trombonist's melodic phrases. The melody of this one definitely told a story , one that ached and soared with ebb-and-flow temporal elasticity. Weiss offered an ultra sensitive percussion contribution, with mallets on the cymbals, yielding to a Tordini solo that dripped big, meaty notes in the lower register and blurry double-stops. The drummer switched to brushes, gently swirling irregular patterns on his kit, while Dessen elicited a mournful vibrato and the trio as a whole reduced down to a triple pianissimo.

In the quiet, the leader began a series of soft multiphonic gurgling, followed by the creation of a slowly developing melody that wound towards a pointed upper register yelping punctuation. That same incremental theme then double-timed, as the trio exclaimed it in unison.

Weiss gradually introduced a series of percussive brushstrokes that led into a wall of explosive accents—then just as quickly faded down to a whisper. The Dessen trio often seemed to be fighting to see who could play the softest, developing multiple levels of quiet that only added to the sense of ritual of it all.

"And We Steal from the Silkworm," a shorter piece, opened with a loose bass vamp delineating the interlocking metric structure of 5/8, 6/8 and 2/4. The second time through the form, the trio played its complex melody in lock-step, with Dessen's laptop electronics acting as a wild card into the ensemble.

A brief but glorious trombone solo served as the bridge from the third to the fourth movements. Dessen's approach to the horn was both understated and stunning, building long, winding paths to the upper register; often using glissandi to approach a target tone, then distorting that same note with warbling vibrato and other timbral manipulations.

Perhaps influenced by the "graphic scores" of multi-instrumentalist Anthony Braxton, "Forget The Pixel" began with a veritable sonic storm of computer generated sound—swirling strands of beeping mayhem, shifting on a dime like schools of fish. Drums and bass entered with a staggered theme alternating between the meters of 3/2 and 9/8. At a certain cue, Dessen and Weiss dropped out, leaving the bassist alone to negotiate an improvised segue into even more oblique landscape, "Licensed Unoperators (for Lisle Ellis)." This piece utilized short descriptive instructions, like "whisper variations w/plunger" as it's score, until arriving at an 11-bar notated theme after the structured group improvisation.

After Tordini and Weiss rested, Dessen utilized a special electronic mute wired into his laptop to begin his mind-boggling solo feature. He activated some prerecorded horn sounds while recording new ones, then removed the electronic mute and began a fierce duet with himself—coaxing sub-toned growls live while interacting with the ever-modulating loops. At one point he actually conjured up the sound of huge predatory beasts wrestling each other to the death. Tordini entered the fray, sawing furiously at his bass while Weiss kept his distance, interjecting occasional punctuations from the edge of his cymbals and the sides of the traps.

The trombonist then launched into a melodic soliloquy, episodic in nature. His thematic invention was all the more profound because he constantly visited the unexpected places. Despite the extended length of the suite, the audience was hardly given the chance for its attention to waver—Dessen's music was too full of information for that to be possible.

By the time the trio arrived at the final movement, "The Utopian Tense Of Green (For Mariangeles),"—a beautiful tone-poem written for his partner in life, the brilliant abstract artist Mariangeles Soto-Diaz—Dessen had activated an ethereal, multi-horn choir from his laptop, while the trio commented with throbbing, probing lines— eventually allowing the horn choir to waft into the rafters of the acoustically wonderful Winifred Smith Concert Hall.

Once sure it was over, the enthusiastic audience erupted with supportive whistles, shouts and sustained applause. A stunning example of creative, adventurous music, utterly devoid of cliché, stretching even the frontiers of free jazz beyond recognition.