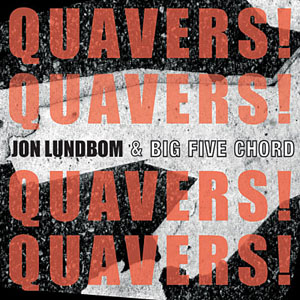 For their sophomore outing on Hot Cup Records and fourth overall, Brooklyn guitarist Jon Lundbom and Big Five Chord take a skewed look at jazz with rock sensibilities—or should that be the other way round? Lundbom can be hard to pin down: he has been compared to the likes of Derek Bailey and a young John McLaughlin, nearer the latter end of the spectrum on this showing. Along for the ride are alto saxophonist Jon Irabagon and bassist Moppa Elliott, both of Mostly Other People Do the Killing fame, and that connection also gives a clue that the music of Big Five Chord pays heartfelt but ironic regard to tradition, albeit through the lens of the guitarist's idiosyncratic compositions.

Together with Irabagon in the somewhat avant horn section is tenor saxophonist Bryan Murray (of Bryan and the Haggards), whose gruff post-Albert Ayler stylings contrast with his partner's alternating mellifluous and multiphonic trajectories. Much of the set's interest derives from their antics in tandem and apart. Both shine on the jackhammer opener "On Jacation," based around an insistent riff carried by the reeds and guitar, but with each alternately breaking out for dissonant shrieking excursions while the others maintain the momentum and build tension. But almost as if he has lost his nerve, for the final third Lundbom departs from the format, embarking on a slashing distorted guitar solo over a choppier backing.

A similar change in direction occurs on the edgy "Meat Without Feet," starting at a rapid clip with contrasting slow horn lines and a notably skuzzy bleating tenor study from Murray, before slipping into a sedate rubato for the leader's ringing guitar extrapolation. "New Feats of Horsemanship" comes on like a slow burning ballad with a languid throaty tenor exhortation choked with emotion, while Irabagon's piping sopranino graces the choppy "Faith-Based Initiative." But in truth nothing quite matches the excitement of the spring-heeled opening track.