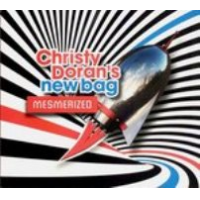 Guitarist Christy Doran's New Bag has negotiated its share of rough waters during its sixteen-year journey. While the ship was severely rocked by the death of drummer Fabian Kuratli in 2008 and the departure of vocalist Bruno Amstad after 12 years in 2011, Doran has soldiered on. His compositions ultimately define New Bag's personality, rather than the individuals in it at a given time dominating. The dynamic Amstad was a hard act to follow, but on the band's eighth recording Doran has turned up a real gem in Sarah Buechi, whose vocal improvisations run from ethereal to wild-cat howls, conjuring a punkish Kate Bush.

The six hard-rocking tunes are a distillation of Doran's influences: the free jazz that Doran explored in Om from 1972-1982; the psychedelic/blues rock inspired by guitarist Jimi Hendrix and evocative, at times, of Frank Zappa/Captain Beefheart; and Doran's interest in Eastern music, which saw mridangam player Muthuswamy Balasubramoniam collaborate with New Bag on Black Box (Double Moon, Records, 2000). Buechi brings a breath of fresh air, and her technically brilliant and emotionally engaging performance is all the more impressive considering that her first live gig with New Bag came a day after the recording sessions.

There's clearly a strong empathy between Doran and Buechi. The fact that Buechi wrote the lyrics to Doran's music no doubt gave her a shared sense of ownership in the compositions and a strong platform from which to launch her singular vocal improvisations. Swiss-born, Dublin based Buechi spent two years in India studying konnakol, but brings the melodic rather than rhythmic flavor of India to the pulsating "The Other Side of the Fence," particularly on the song's dreamy mid-section. Rhodes player Vincent Membrez doubles on bass-synth and lead duties, and drummer Lionel Friedli holds a steady beat as Doran executes a solo that briefly flashes its teeth between raw sounding snarls and growling blues.

The overall vibe is one of sophisticated alternative rock. On the punchy "Three Punk Chords Tango," Doran's gritty guitar solo is followed by delicate Rhodes and sensational vocals, with Buechi's jazzy purring gradually gaining wings. "Angel Hair" shifts between heavy guitar motifs and vocals in unison and far-out-there guitar effects. There's barely light between guitar and vocal lines on the helter skelter intro to "Long Distance Run," though a slow and sultry vocal/Rhodes passage steers the tune into a meditative realm. Buechi eventually stirs the little oases of calm, inviting Doran into psychedelic guitar overdrive over a racing rhythm.

The title track is all coiled tension and dramatic release. Vocalist and guitarist slowly ratchet up the tension, their disciplined lines giving way to heady guitar and keyboard distortions. Both the tightly woven quartet passages and Doran's wild-horses solo tearing free are tremendously exciting. "Techno Sketches" follows similar dual roads of control and freedom, climaxing in a spectacular tandem flight between Doran and Buechi.

Doran's latest incarnation of New Bag fairly bristles with energy. The collective swagger and individual brilliance on bold display marks Mesmerized out as one of Doran's very best in his long, illustrious career. Who says an old dog can't learn new tricks?