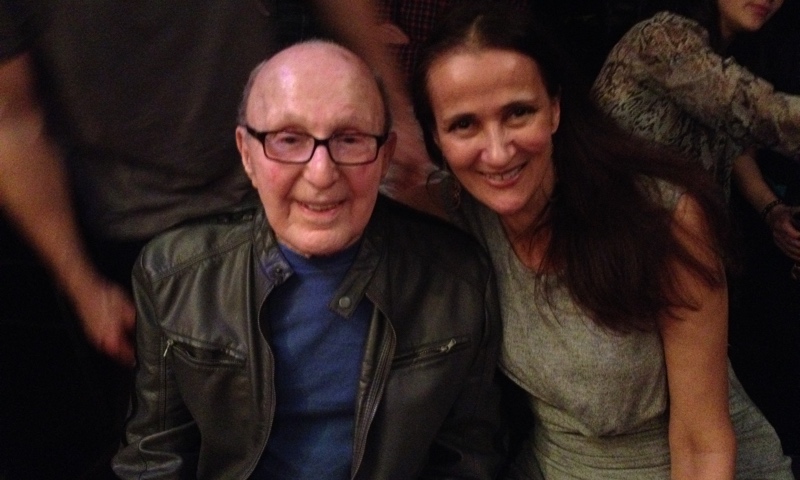 BY TESSA SOUTER AND ANDREA WOLPER
August 6, 2020
Sign in to view read count

I saw Billie Holiday on 52nd Street. I was shaking. I was standing because the place was jammed and she almost brushed into me. She had a gardenia in her hair. I couldn't believe I was there.

In memory of our good friend and our first Super Fan recipient, Sal Capozucca, who passed away at age 97 on August 4, 2020. This article was first published in June 2016.

He came, he saw, he took a picture! Our first Super Fan, 94-year-old Sal Capozucca, has been going out to hear live jazz for more than 80 years, ever since getting hooked by a Benny Goodman and Gene Krupa concert in 1937. You name 'em, he saw 'em—Pops, Bird, Billie, Miles, Coltrane—and he doesn't plan to let up any time soon. "I saw 118 shows in New York last summer. It's what I live for."

I go almost every other night when I am in New York. I saw 118 shows in New York last summer. It's what I live for. I used to be into fitness but when I was 90 I broke a rib and my doctor told me to cool it. I've been going to hear live music for nearly 80 years. I'm 94 years old.

It's the ambience. The people enjoying it. The expression of the person taking the solo. The sweat. It's like doing it yourself.

Tell us a little bit about yourself.

I'm the type that gets tired of doing one thing. I've done numerous things. I worked with Chesky Records on their trade shows for 20 years. I also worked with the American Ballet Theater when Mikhail Baryshnikov was there. And I played drums in a band in Brooklyn three or four nights a week for about seven or eight years.

My father playing opera records at home and I liked it.

How old were you when you got your first record, and what was it?

I was 16. It was Artie Shaw's Begin the Beguine, which came out in 1938. I loved that record and listened to it over and over again—just to hear the rim shots from Buddy Rich. I loved the sound of it. My parents loved it too—my mother, especially.

Can you identify one album or experience that was your doorway to jazz?

It was the live performances that really hooked me. My first concert was in 1937, when I saw Benny Goodman with Gene Krupa at the Paramount Theater, and it just got me. I was hooked. In those days, you'd go to a movie, and a big band would come on afterwards. As a matter of fact, that's where I saw Chick Webb and Ella Fitzgerald.

What is the most trouble you've gone to to get to a performance?

I've never had any trouble. I have seen so much. I liked the big bands when I first started listening. There were so many good groups then! My favorite was the Count Basie Big Band. Also Stan Kenton and Woody Herman with Stan Getz. Small bands weren't so popular. Me and my friend used to take the subway up to the Savoy in Harlem to see the Savoy Sultans. Not too many white people around back then. I had a great life. And I ain't finished.

My favorite club depends on whoever is playing there that night. I prefer that it's just music and no food. I love the Village Vanguard. I like Smalls because a lot of young new artists play there and I want to see jazz continuing on. And I go to the Blue Note and Dizzy's a lot. Those are the three where I have the green lights. Oh, and Mezzrow. And I have a really great time on the jazz cruises because I've gotten to know all the musicians. A lot of people enjoy the jazz and don't tell the musicians afterwards. But I always tell them, and then I get to know them.

No. If I'd wanted to see it, I would have been there.

The original Birdland. That was my home. It had big bands, small groups, I saw everyone, Dizzy, Stan Kenton, Ella, Bird .... and I knew Pee Wee, the MC. There'd be a line around the corner and he'd let me right in. There were a lot of other jazz clubs on 52nd Street back then. That's also where I saw Billie Holiday. That was a treat. I was shaking. I was standing because the place was jammed and she almost brushed into me. She had a gardenia in her hair. I couldn't believe I was there. I only saw her once and that once was enough.

Who is playing and the way the audience reacts. I like it when the leader announces the name of the songs and talks. Some leaders don't say a word until the end. I don't like that.

Bird. I saw him many times. I saw him with Miles, I saw him with Dizzy. He's the one that gave me goosies. In those days you took it for granted. You don't think they're going to leave us. And when it happens it's very sad.

How do you discover new artists nowadays?

By seeing them. I still get around, and I go to as many shows as I can.

I prefer vinyl and I have so many vinyl records in New York. But in Florida I listen to CDs or to MP3s on my iPad.

What do you like about hearing live music as opposed to recordings?

It's nice when you see the artist and their expression. It is completely different. If the artist is not around anymore, that's fair enough to listen to the recording. Otherwise, I prefer to see them in person.

Drums. I used to play. I was no big shot, but I loved doing it. I played for seven or eight years about three nights a week in Brooklyn and we did parties, too. We did as much jazz as we could.

What do you love about living in the New York area?

Oh! Just being there and seeing all the action and people running around and all the great clubs, museums and restaurants. I love that a lot of jazz clubs are within three or four blocks of each other.

I don't think it's alive enough. It is the least selling music of all the genres.

Do you drive your non-jazz-loving friends crazy with your encyclopedic knowledge of jazz history? Is jazz a big part of what makes life worth living? Do you have an extensive collection of recordings, save ticket stubs, go out to hear live jazz a lot, remember the first concert you ever attended? If any or all of those sound like you, you might be a Jazz Super Fan—and we'd like to consider you for an upcoming column. Contact us for consideration.