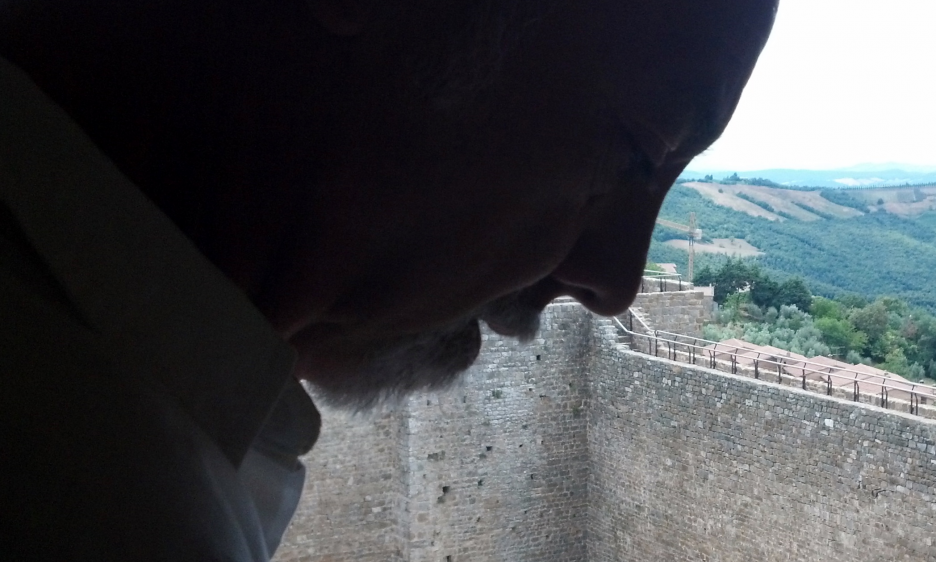 The hills of the Hudson Valley with Emily, the deer, the bears, the battling hummingbirds, a seasonal view of the Shawangunk Ridge, and our three cats.

I had been writing and contributing to more rock and folk oriented publications for years as the Rock 'n' Roll Curmudgeon when a couple of encouraging regional jazz musicians and publicists advised me to seek out All About Jazz. I inquired and Michael took me and my often recalcitrant style aboard and it's been a rewarding association ever since. One funny recollection about the rock thing though. I was turned down by Mojo Magazine because they felt my style was too much like the great Lester Bangs. That was a backhanded compliment if ever I'd received one.

I tussle with my inner pundit a lot so I do CD reviews mostly. When we could go out and see shows I reviewed a few but, to be honest, when I'm at a play or jazz gig or rock show with Emily and others, I just want to realize how fortunate I am to live live events as they happen. Our present history doesn't allow for that. So I don't want to be scribbling on napkins and receipts to later try and decipher whatever my impressions of the night were and how great was this and that was or wasn't.

Well after The Beatles ruined my life it goes like this: In the mid-'70s I was a roadie and light guy for a then very popular Hudson Valley band. I co-wrote their most popular song "I Can't Drive Every Highway." I then did a lot of regional music productions and a lot of videos. I had songs turned down by music publishers in Nashville because "what do city kids know about country music?" Now it appears anyone from anywhere can write one. In the early '80's I was the songwriter and off-key voice of the punkily cantankerous Sic Pups and in the early to mid-'90s, I was the same for the spiky, political, and experimental New Nervous Voice. New Nervous Voice lost their record/distribution deal in the label squeeze of the day. We were in good company though. Major folk like Van Morrison and Joni Mitchell got squeezed too. You can see and hear some of New Nervous Voice videos on my YouTube page.

In between all that I was co-producing and co-writing some great songs for a Hudson Valley supergroup, The Rent, who were, by general consensus, on par with Petty and ahead of Mellancamp but in the end they were the great American band that didn't have the balls to go all the way.

As a performing poet, I've kept my hand in the spoken word/audio realm. I recently put out a CD to accompany my latest collection of poems, AmericanMental.

No big secret there. What else could it have been but Meet The Beatles? Even with all the remixes and remasters the original vinyl with all its scritches, scratches, pops and dings still sounds like you're hearing it for the very first time.

It's mostly jazz these days because I can't seem to generate enough interest to listen to whatever is considered rock 'n' roll these days. It's amazing how much like everything else two guitars, bass and drums can sound sixty years down the line. But put a jazz trio or quartet in the same room and you're hearing something new. I find the contrast more than amazing. Rock was so new at a time. A good long time. It doesn't seem that fresh anymore.

Well it's four-thirty in the morning and as we speak, I'm shifting happily between two new releases: Terje Rypdal's Conspiracy and Stephanie Richards' Supersense. Over the last week or so I've been listening to two very excellent new recordings. Branches Vol. 1 by cellist Tomoko Omura and bassist Matt Ulery's Pollinator . I also haven't been able to let go of Bob Dylan's Rough and Rowdy Ways. Pearl Jam's Gigaton sneaks into the playlist when Emily isn't home.

Even in the bleakest of times which each generation can argue happened or is happening on their watch, it is our artists who champion and call and this grim season has featured plenty of inspiring stuff. I mean, besides the previously mentioned sets, Art Blakey's super cool, previously unreleased Just Coolin' hits the spot. I'm also looking very much forward to the upcoming 5-CD sets Joni Mitchell's Archives Vol: 1 The Early Years (1963-1967) and Tom Petty's Wildflowers.

I'm not going to lie. Expanding the brain with many of the wide array of pharmaceutical agents available at the time, especially when Weather Report, Return to Forever, Herbie Hancock and Miles Davis funk/space/ambient/grooves weren't far from anyone's turntables helped immensely.

As a widely published poet and public performer (latest book AmericanMental, Luchador Press, 2020) it takes up a lot of free time. But is it free? Seems like work sometimes, especially trying to sell a new book (or any of the older ones come to think of it) during our latest national and global misfortunes. Hobbies include photo-visualization (I like to deconstruct boring photos using my limited skills on Photoshop until something new emerges) and I love to hike the mountain trails of the Hudson Valley. Autumn's here and that's where I'll be. I still keep my hand in songwriting with a Hudson Valley musician or two. I've also, after years of urging from Emily and friends, started to abstract paint on driftwood. And I'm really, really hoping to get back to my three-hour, Tuesday night jazz program Jazz Sanctuary on WOOC-FM 93.5 out of Troy, NY.

Seriously, who wants to hear the news? As active citizens we have to stay informed and conscious but you also have to dream and that's where the music comes in. I've also started to write my poetry while under the influence of the music, something I haven't usually done in the past and I'm liking some of the results.

It helps to continue and propel forward a great tradition and its deep, rich history. There is a great sense of creativity to jazz and jazz writing. And as we've become more separated physically the writing connects us to readers and listeners. It still boggles my mind when I see how many readers check out my reviews. Be it a handful or a hundred or several thousand, we are communicating. That a handful may then go to my website or blog to investigate or listen to the poetry links us as humans even more because, when all is tallied, we are meant to, no let me say we need to, talk to each other.

It allows for and inspires the communication I was just speaking about.

You mean besides all the great music I get to listen too? Getting messages from readers and musicians from all over the world, some of us even sharing our creative endeavors is pretty damn cool. That I've gotten to make the acquaintance of Michael, Chris May and a couple other folk from AAJ is rewarding, as is expanding my readership.

Okay, I admit it. As eager as I was to return to vinyl after interviewing writer Michael Fremer a few years back, I went and bought a refurbished turntable and went back to my vinyl but I forgot I had to flip sides every twenty or so minutes and it just seemed to take the mystery out of vinyl. I still do from time to time but it's mostly streaming and CDs for me.

As an eager student of history that's a real hard one to quantify. Each release I listen to, be it brand spanking new or archival, debut recording or umpteenth one, affords me a chance to dig into the history of the music and the times and apply it to my review. History is always with us no matter how far ahead we fool ourselves to believe we are. I think I'll leave that one to the folks that regularly read what I contribute.

Would you do it all again?

Why the hell not. I've loved a lot, have crossed a lot of paths and I've gotten to present and express myself in ways most never get a chance to do.

Visit Mike at All About Jazz.