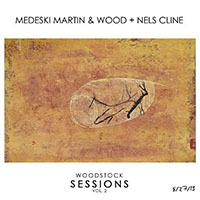 In retrospect, it was inevitable; why it took so long for veteran jazz jam band Medeski, Martin & Wood to get together with Nels Cline is anybody's guess. The über-guitarist has, since joining Wilco a decade ago, managed to significantly raise his visibility, but anybody who suggests that he's been "moonlighting" in the alt-country/alt-rock/alt-alt band to pay the rent hasn't been paying attention. Like keyboardist John Medeski, drummer Billy Martin and bassist Chris Wood, Cline's career has been largely associated with jazz—well, before Wilco, that is; that's all changed now—through his lengthy association with Cryptogramophone Records and albums with his longstanding Nels Cline Singers including Draw Breath (2007); his imaginative tribute to Andrew Hill on New Monastery (2006); and his similarly long tenure with Cryptogramophone label head, violinist Jeff Gauthier's Goatette on releases like Open Source (2011). But that's only part of Cline; he's as much Jimi Hendrix as he is Jim Hall, and if he's happier than the proverbial pig in poop with Wilco, that's only because he shares the group's love of roots music and seminal '60s bands like The Byrds.

Woodstock Sessions, Vol. 2 ain't any of that, however, though Cline's tremolo-driven guitar on the closing "Cinders" certainly speaks to his rootsier tendencies, despite Wood's percussion being more textural than propulsive, and Medeski's similarly tremelo'd Fender Rhodes creating a more ambient cushion. And by the end of the five-minute piece, everyone has transcended any such categorization into a place of even greater freedom, with Wood's upper register slide bass guitar and Cline's even more stratospherically electro-processed guitar harmonics drawing the 63-minute collective improvisation, performed live in front of a studio audience, to a surprisingly soft close.

Cline also channels his inner King Crimson on the frenetically driven "Mezcal," though the rapid-picked blue notes are more John Scofield than Robert Fripp, and his mid-piece solo on the free-rock of "Arm & Leg" alludes to a Hendrix brought into the new millennium with the kinds of effects about which the long-gone guitar legend could only have dreamed. But truthfully, all such comparisons are both academic and moot; Cline may be the sum total of a massive number of touchstones, but at the end of the day, their confluence—and his ability to shift gears melodically, texturally and harmonically at the drop of a hat—has made him as instantly recognizable and impossible to copy as those he considers to be his heroes.

If Cline is a new guitar hero for the 21st Century, then the same goes for the members of MMW: the trio may have brought the term "jam band" to jazz when it first emerged in the '90s with groove-heavy albums like Friday Afternoon in the Universe (Gramavision, 1995) and Shack-Man (Gramavision, 1996), but a lot has happened since then, as all three band members have stretched beyond anything their early recordings might have suggested possible. The trio continues to groove deeply, to be sure, on albums like the live Scofield collaboration In Case the World Changes Its Mind (Indirecto, 2011), but has proven just as likely to explore the broadest and furthest reaches of improvisational exploration on its to-date magnum opus, the aptly titled Radiolarians—The Evolutionary Set (Indirecto, 2009), where the trio brought in music from far and wide to continue the modus operandi of the box set's title.

There's a lot of noise, jagged edges and hard surfaces on Woodstock Sessions, Vol. 2; at times, reminiscent of Norway's Supersilent but with a stronger attention to pulse. Medeski may well be the broadest, most versatile American equivalent this side of Supersilent's Ståle Storløkken, his even larger arsenal of analog keyboards evoking distant memories of '60s Farfisa organs on "Bonjour Beze," but only just before a frenzied synth solo that's held to ground by Martin and Wood's firm but still shifting anchor. Cline responds to Medeski in kind, creating harsh, jagged sounds that were never really meant to come from a guitar but, for a guitarist who includes things like egg beaters and small fans in his arsenal, continually finds new ways to expand his instrument's tonal and textural potential.

It's a set that may not be for the faint-of-heart; even when Martin & Wood create a visceral, funkified pulse on "Looters," Cline's supersonic guitar histrionics—at one point sounding even sicker than Jeff Beck at the end of "You Shook Me," from the seminal British guitarist's 1968 Epic debut, Truth—sends them places they'd simply never have gone otherwise.

Still, nobody ever said that Cline would make things easy. If Scofield's collaborations with MMW have brought out their inner groove-meisters, then Woodstock Sessions, Vol. 2 finds the decade-long Wilco guitarist encouraging the trio to go to musical places no one has truly gone before. It may be a roller coaster of a listen but it's still somehow a strangely attractive one, especially when experienced old school, as a whole rather than a set of nine individual tracks. The only thing left to wonder, after experiencing the mind-stretching, at times psychedelic and otherworldly Woodstock Sessions, Vol. 2 is: where the heck is Vol. 1, guys?