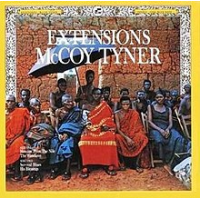 Languishing off-catalogue for many years, McCoy Tyner's Extensions may be the pianist's most unjustly neglected album. Strange days, for not only is the music ineffably vibrant, but Extensions is the only recording ever to feature Tyner alongside pianist and harpist Alice Coltrane, who replaced him in saxophonist John Coltrane's group in 1966. The album has one foot in the echoes of John Coltrane's "classic quartet," of which Tyner was a member from 1960-65, and the other in the astral jazz style which Alice Coltrane and saxophonist Pharoah Sanders fashioned in the late 1960s and early 1970s.

After quitting John Coltrane, Tyner moved to Blue Note Records, before signing with Milestone in 1972, where he became a major draw through the decade and into the early 1980s. Extensions was the sixth of seven LPs he made for Blue Note between 1967 and 1970. These include the acclaimed The Real McCoy (1967), one the last albums to be produced by the label's founder, Alfred Lion, before ill-health led to his retirement, and Time For Tyner (1968), and also Asante (1970), another relatively uncelebrated work, which has pronounced stylistic links with Extensions.

The lineup for Extensions included The Real McCoy's drum and bass team of Elvin Jones and Ron Carter, but replaced tenor saxophonist Joe Henderson with Wayne Shorter, on tenor and soprano, and Gary Bartz, on alto. Alice Coltrane is featured on harp on three of Extensions' four tracks: "Message From The Nile," "Survival Blues" and "His Blessings." The first of these has a playing time of 12:21 minutes, the second 13:15, and they are the joint cornerstones of the disc, respectively opening side one and side two of the original LP.

Extensions looks ahead to the global-cultural inclusiveness of Tyner's work for Milestone in the mid and late 1970s, itself an important part of the astral jazz aesthetic. But although the album includes some of that style's signature elements, it does not wholly embrace it. The reasons were likely as much philosophical as musical.

As a devout Muslim, Tyner would have had little time for astral jazz's pantheism, and presumably even less for the psychedelics used by some of its practitioners. But he had long been drawn to African music, another astral signature, telling interviewer Frank Kofsky in 1966 that Africa was where he looked for inspiration (see Kofsky's Black Nationalism and the Revolution in Music, Pathfinder Press, 1970). With Elvin Jones in the band, Tyner, like John Coltrane before him, had a direct line to African music's rhythmic legacy, and with Alice Coltrane, he had one of astral jazz's most influential artists on board too.

Extensions, then, is astral jazz without the bells, reefer, acid and incense. The opening track, "Message From The Nile" (the title could have come straight off a contemporaneous Pharoah Sanders or Alice Coltrane Impulse! album), opens with Coltrane's sweeping harp glissandos before settling into a steady, West African-derived groove supported by an earthy bass ostinato. There are soaring, lyrical solos from Tyner, Wayne Shorter, on vocalized tenor, and Coltrane.

"The Wanderer," which follows, is medium-fast hard bop and more closely in "classic quartet" territory. It is a restless, questing performance, which moves into free rhythm and outer edge harmonics, with solos from Tyner, both saxophonists and Jones.

The final two tracks, the medium-fast "Survival Blues," which also edges into atonality, and "His Blessings," a peaceful modal ballad, take us back into the mystic. Coltrane colors both tracks, and solos on "His Blessings." And someone, possibly Coltrane, is heard on bells behind Carter's solo on "Survival Blues." Like "Message From The Nile," both tracks are gorgeous.

Extensions is not certified astral jazz, but it follows a parallel musical path. Currently, in 2011, on-catalogue again, it deserves wider recognition.

Message From The Nile; The Wanderer; Survival Blues; His Blessings.