By Troy Collins
December 13, 2011
Sign in to view read count 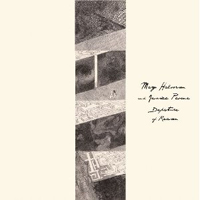 Departure of Reason is guitarist Mary Halvorson and violist Jessica Pavone's fourth duo recording, following Thin Air (Thirsty Ear, 2009), On and Off (Skirl, 2007) and Prairies (Lucky Kitchen, 2005). As leading lights of the fertile Brooklyn scene, their unique musical vocabulary encompasses a wealth of seemingly unrelated genres, from flamenco and folk to madrigal and metal; their seamless transitions between these disparate styles serve as the underlying foundation for experimental improvisations that skirt the tenuous divide between free jazz and the avant-garde. Intimate dialogues based on stately neo-classical themes provide their formal constructions with an inimitable perspective; the unified focus of their maturing expressionism exudes a striking cohesiveness merely implied in previous similar efforts.

Sequenced in alternating fashion, authorship of the album's ten new songs is split evenly between Halvorson and Pavone. Though hailing from diverse backgrounds, their refined duet writing shares an aesthetic similarity inspired by longstanding friendship. Blurring the boundaries between Eastern European folk forms and modern jazz improvisation, Halvorson's lithe minor key opener, "The Other Thing," provides a consummate display of the pair's fraternal rapport; each sinuous turn of phrase and abrupt change in accompaniment reveals an ever deeper level of virtuosic interplay.

Three of the songs include lyrics. "The Object of Tuesday," "Saturn" and "Why Should You Surrender" feature impressionistic refrains concordant with the tunes' oblique cadences and staggered meters. Lyrically, Halvorson and Pavone's poetic wordplay courts abstraction, yet their haunting altos convey the beguiling texts with honest emotional candor, tempering pretension with heartfelt sincerity. More sophisticated and confidently articulated than their previous duo efforts, Departure of Reason is a masterful example of cutting-edge creative improvised music that defies categorization.

That Other Thing; Hyphen; The Object of Tuesday; Begin Again; Onslaught; New October; Saturn; Ruth Romain; Ruin; Why Should You Surrender.