BY MARK SULLIVAN
October 21, 2015
Sign in to view read count 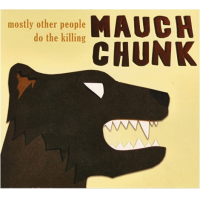 Mostly Other People Do the Killing, the bad boys of jazz, don't quite turn in a straight ahead hard bop album with Mauch Chunk, but it's as close as they are likely to get. The new quartet has pianist Ron Stabinsky in place of longtime trumpeter Peter Evans—which seems to ground the group sound—and there's less obvious classic jazz deconstruction and quotation than normal. Saxophonist Jon Irabagon stays on alto for the entire session, something he has not done in awhile. The sort-of title tune "Mauch Chunk is Jim Thorpe" opens the program with a jaunty swing, and it stays in character...but Irabagon can't resist throwing in a quote from the standard "Misty" during his solo.

There's a definite Latin tinge to the set: "West Bolivar" bears a dedication to Brazilian singer/songwriter Caetano Veloso, and has the bossa nova feel to prove it. "Obelisk" is a montuno (Stabinsky gets in a quote from "Do the Hustle" during his solo, then quotes "Sunshine Of Your Love" and Philip Glass during the end section), and "Mehoopany" closes the album with an upbeat boogaloo groove. "Townville" has a swing feel that dissolves into a free section, then back, making it the most predictably unpredictable selection. It shows the band up to their old tricks, complete with another Irabagon solo quote, this time the show tune "Bewitched, Bothered and Bewildered."

Finally, a word about the song titles. As usual bassist Moppa Elliott has chosen arbitrary town names from his native Pennsylvania—although here one of them, "Herminie," was chosen because it is the hometown of dedicatee Sonny Clark. But the title town of Mauch Chunk no longer exists, because they changed the town name to Jim Thorpe to bolster tourism and honor the great native American athlete. Elliott's liner notes (written under his usual Leonard Featherweight pseudonym) are completely devoted to discussion of the name change and to Jim Thorpe's career. Fascinating history, but one wonders if the choice of subject is also an oblique reference to the famous Miles Davis liner notes that discussed his wardrobe rather than the music.