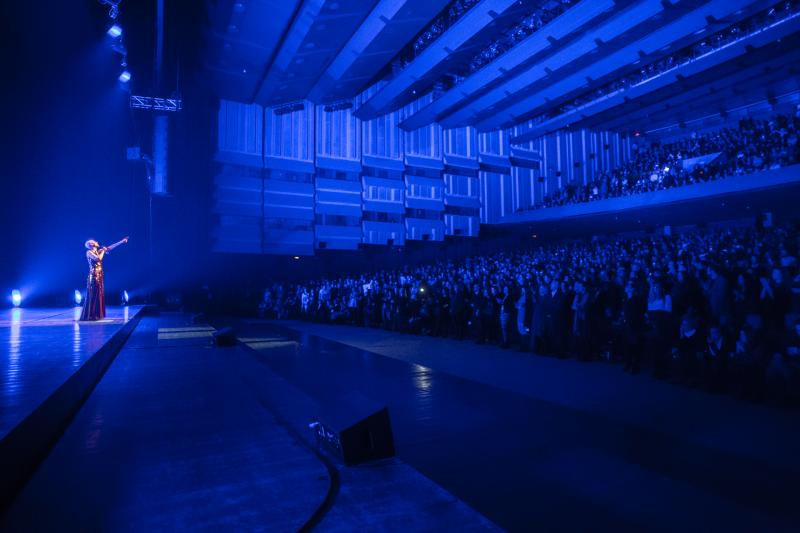 Making a dramatic entrance on the stage comes naturally to Portuguese fado diva Mariza. In the completely darkened hall of Sava Centar, she quietly stepped onto the stage to the sounds of the guitar and wowed the audience with the power of her voice. The opening tune of the night "Por Ti" was a poignant yet dramatic duet between Mariza and guitarist Pedro Jóia. The songs that followed showcased her voice and powerful stage presence, even more, when the whole band joined in. The few introductory songs from her traditional fado repertoire like "Ja Me Deixou" and "Primavera" were sung in a lowly lit stage and she was mesmerizingly vulnerable as she sang them. On the other hand, she certainly showcased the enormous emotional range she possesses as she effortlessly switched from soulful melancholia to jollity.

Mariza defines musical elegance in manner that evokes a different era which has captivated audiences ever since she first appeared on the scene 15 years ago. As the lights turned on it revealed an elegantly dressed woman who looked glorious in a red flowing dress as she moved or whirled on stage backed by a very able and versatile band. Her own band was a bare-bones quartet: José Manuel Neto on Portuguese bouzouki (Portuguese guitar), Pedro Jóia on classical guitar, Angolan-Portuguese bassist Fernando "Yami" Araújo, and the very talented Vicky Marques on drums and percussion. Fado is a kind of music that exposes every vocal nuance and the guitars each subtly influenced the contours of her vocals. The singer's charming, sometimes playful demeanor allowed her to pull the audience into an intimate embrace which was no easy task in a capacity-filled concert hall of this size.

With the upbeat and dynamic "Missangas" the show stepped onto a different stage both in dynamics and the way the stage was lit. Mariza embodied the songs she sang and she looked and sounded tremendous, stalking the stage in her long, glittering gowns. Obviously in good spirits, she regularly addressed the audience. The city of Belgrade is always a regular stop on her tours and this was her 6th performance here in recent years so she is a household name now. As a master of ceremony, she talked a lot when she introduced the songs both with the stories and the emotions behind them.

What she gave emphasis on were songs from the Mundo album and she explained at great length that this music explained her profound metamorphosis as a result of becoming a mother. The flow of the songs' dynamics varied greatly when she sang songs like "Sem Ti" or "Caprichiosa" but the emotional intensity was always high. There were songs like "Rio de Magoa" or a song from her first album "Chuva," but one of the highlights was the "Barco Negro" which was rearranged with long African- like drums for the intro. This song is one of the staples in her repertoire and is certainly one of the most playful ones. Apart from the regular songs that can be found on the recordings she treated the audience with a song written by Vinicius de Moraes which she usually does during rehearsals or soundchecks—""O Home Que Diz" and a new song that has yet to be recorded for a new album.

The rapport she had with the musicians was keenly felt as she introduced them several times and gave a solo spot for the bassist to sing his song. All of them played crucial roles but the focus of the evening was the symbiotic connection between Mariza and the audience. During the many encores it seemed she didn't want to call it a night and she went on singing but this time she sang while walking among the crowd. She moved very swiftly among the people and making an eye contact while she sang the penultimate "Meu Fado Meu" or when she engaged the audience to sing in a call and response manner on "O Gente da Minha Terra." Mariza is a dynamic and demanding performer who engages her audience directly and by the end, she had the whole auditorium on its feet.

Without a doubt, after two hours, the enthralled crowd showed no intention of calling it a night as they would have liked to hold the musicians as hostages for another entire set. They wanted to hear more. Mariza demonstrated both her enormous artistic and emotional range, depth and intelligence that very few can match. She was in a blistering form as she delivered a dazzling and very engaging performance that stopped time for a bit. From heartfelt to moving and from sultry to romantic she gave her all.