By Geannine Reid
December 12, 2017
Sign in to view read count 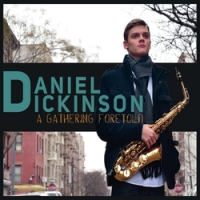 It's hard to picture Dickinson as a debut artist, with a cast of characters that range from; Christian Sands, Michael Dease, Ulysses Owens, Jr., featured on A Gathering Foretold. Altoist Daniel Dickinson should not be overlooked as another side player ponying up for the known players, on whatever recording of the moment that seems to be permeating the jazz genre as of late. Dickinson himself was recognized early on as a prodigy by his teachers and already can be heard on various recordings. Dickinson had the honor of not only studying with revolutionary musicians such as Bunky Green on saxophone and Guy Yehuda on clarinet, he received esteemed recognition from national music publications and organizations, such as the McCoy Scholarship from the North East Florida Jazz Association, the "best composition" award from Downbeat magazine, and acceptance to the 2014 Disney All-American College Band program in Anaheim, California. While in Florida, Daniel also had the pleasure of performing frequently with the Jacksonville symphony. Daniel recently graduated from the Betty Carter Jazz Ahead Program at the John F. Kennedy Center for the Performing Arts, and is currently pursuing a master's degree in jazz composition at the Manhattan School of Music in New York City.

"Cry of the Wolf" opens the album, with Bowlus playing Tynerisms over a relaxed medium swing set up by Rogers and Owens. The horns enter to tell their melodic story. It is one of fluidity and hip band hits through an easy to follow form. Dickenson's solo is full of strength. His tone is full and strong, his lines have strong direction and resolution, while settling in the pocket. Taking his time to tell his story, he builds his ideas with the help of the band to a logical climax and satisfying musical journey.

"A Gathering Foretold" is a fine example of the power of Dickinson's pen, as well as his horn. The composition has a nice medium up-tempo that support the melodic statement. Dickinson improvises before he states the melody and he flows seamlessly into the written part, that the entire arc of his improvisation and written melody sound as one.

We all love original compositions from an artist, but most musicians and avid jazz listeners want to hear how an artist approaches standards. Dickinson gives us that opportunity twice with two standards, "Yes or No" and "Darn That Dream." Both reveal the depth and command of his horn playing, and the grasp of jazz language Dickinson possesses. Never overplaying, but always pushing forward his musical statement in a clear and concise manner. That brings us the real métier of Dickinson's playing, he is able to clearly communicate an emotional melodic line, and in a jazz musician, it doesn't get better than that!