BY HRAYR ATTARIAN
December 12, 2017
Sign in to view read count 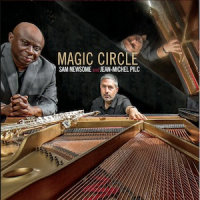 Intimate, innovative and captivating Magic Circle is an album of duets between soprano saxophonist Sam Newsome and pianist Jean-Michel Pilc. Although they perform primarily standards their interpretations are anything but conventional. Both musicians are known for their individual styles and singular approaches to improvisation and they showcase these superbly on the current disc.

Pianist and bandleader Duke Ellington's "In a Sentimental Mood" opens with almost baroque refrains of Newsome's rich, meditative saxophone. Pilc's tolling piano provides a dark undertone. When Newsome and Pilc finally launch into the actual melody they endow it with melancholic dissonance and perfectly expose the timeless vibrancy of Ellington's masterpiece.

There are two originals on the recording one of which is the mystical title track. Pilc plays dramatic note clusters that echo against Newsome's unfettered flittering soprano. Newsome injects into his contemplative song atonal wails and sharp, heartfelt harmonic fragments. Pilc's expectant rolling chords underscore the turbulence of Newsome's acerbic, emotive solo.

One of the gems on this uniformly brilliant recording is saxophonist John Coltrane's "Giant Steps." Pilc recreates the main theme from a flood of arpeggio filled phrases. Newsome deftly manipulates the piece adding intriguing ideas and peppering it with his own spontaneity. The constant metamorphosis of the duos rendition is in keeping with Coltrane's adventurous spirit.

There are many other exquisite readings of these jazz classics, none, however are like Magic Circle. The uniqueness of this Newsome and Pilc collaboration lies in the way they reconstruct these works, expressing free-flowing individuality and simultaneously exposing the ingenuity of the compositions themselves.

Autumn Leaves; In a Sentimental Mood; Giant Steps; In a Mellow Tone; Magic Circle; Misterioso; Auto-Schediasm; Out of Nowhere; Ask Me Now.