Guitarist Marc Ribot's performance with his Spiritual Unity quartet, at the Cleveland Museum of Art, was the culmination of a three-evening nod to celebrated avant-gardist, and Cleveland native, Albert Ayler. Two days earlier, the museum screened Kasper Collin's 2007 documentary film on the saxophonist, My Name is Albert Ayler, and a panel discussion on Ayler's music and legacy was presented at Case Western Reserve University on the evening before the concert. While those events cast an educated eye to the past, the music from Ribot's group demonstrated that Ayler's spirit still pushes forcefully on today.

The program called for the group to stick to the five pieces from its 2005 Ayler homage, Spiritual Unity (Pi Recordings), if, perhaps, in an altered sequence. Whether that was how it ultimately played out is hard to say—and, ultimately, unimportant. As with Ayler's playing, familiar motifs (that is, those both commonly heard in Ayler's music and part of jazz and world folk traditions) rose time and again to re-center the music and enforce the primal drive that beats at the heart of Ayler's questing—perhaps, quixotic—art. The music developed organically, rising into loud squawks of group improvisation and ebbing to quieter, more personal solo statements. There were pauses, but they operated in a classical vein, marking different passages—different movements—of a single story. Ribot often re-awoke the music after these pauses, with quiet, single-noted contemplations miked acoustically from his electric guitar. One by one, the other members would join in, and the spiritual deluge was off.

Trumpeter Roy Campbell, Jr. stood center stage, playing Donald Ayler to Ribot's Albert. He also proved himself something of a juggler, rotating through a gaggle of metal instruments: trumpet, flugelhorn, pocket trumpet and, briefly, flute. He favored a highly breathy intonation that inflated notes till their frayed edges morphed into neighboring sonic terrain. But he was often also forceful, spraying the hall with free jazz buckshot. Next to him, Ribot kept up the onslaught with a host of noises—scrabbly chordal crunches, high-end wails cast by a bare-finger slide, tough single-note lines, rapid-fire shredding, balalaika trills, trumpet-like muted tones, and insistent chugging, bluesy R&B-tinged rhythms à la Chuck Berry, slipping into pentatonic Clapton finishes. Guitarist and trumpeter played nicely off one another throughout the evening, invoking the Ayler brothers' slightly skewed harmonics with invigorating aplomb. 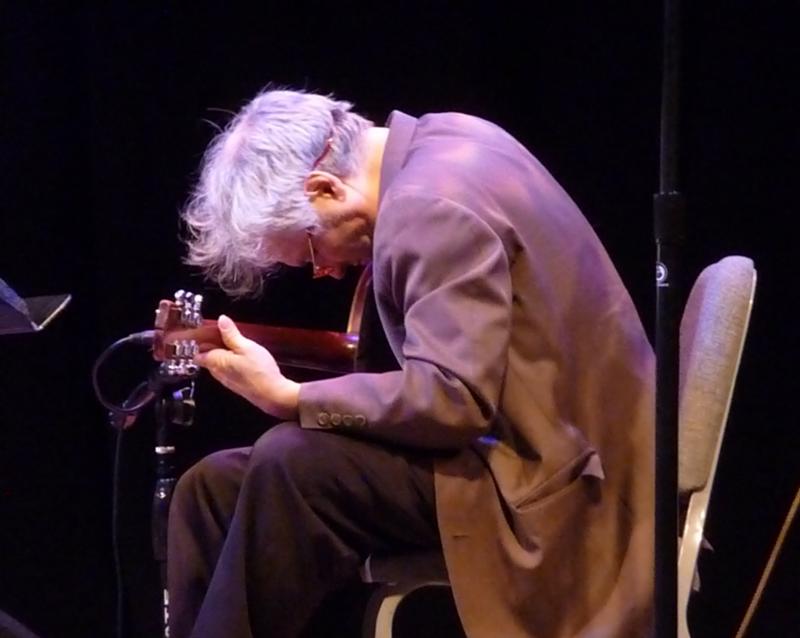 Bassist Henry Grimes—former Ayler band mate and spiritual godfather of the current group—stood stage right, positioned stoically with his bass, his expressionless visage projecting a physical detachment from the music and the piece of wood caught in his left hand. The black sweatband wrapping his temples seemed a piece of ironic theater. But his fingers remained nimble and quick, releasing highly fluid streams of an inevitable music, whether plucking or bowing his instrument. He picked up his violin in the late going to counter with scraping insistence Campbell's best solo of the night, a character-rich flow of ideas, rendered on pocket trumpet, with his left hand employed as a mute.

Drummer Chad Taylor supplied a tapestry of percussive colors behind the three out front, propelling the mayhem with all-out assaults on his kit when that was in order, then complementing the softer, personal statements with brushes or a sprinkling of bells. His solos revealed the core of Ayler's music—that amalgamation of Western and African musical traditions in an alloy that nonetheless displays the elemental colors in stark relief. Once, Taylor played the toms and snares of his modern kit with open hands. Later, he soloed with a stick in his right hand, a mallet in his left. More than a nod to the African beats that fed the evolution of Western popular music, Taylor's statements brought those primal forces forward to effect a side-by-side conversation between ancestor and descendent.

"We've spent a long time trying to walk through the doors that Albert Ayler opened," Ribot confirmed midway through the performance, speaking not only for those on stage, seemingly, but for a whole host of musicians, in an array of genres, who have followed in Ayler's wake and been shifted by its sway. Patriarch Ed Ayler, having now buried both Albert and Donald, sat in the audience with other members of the Ayler family. No doubt, it was rewarding to hear not only this spoken confirmation of his sons' legacy, but also the live, breathing music that has sprung from it, picking up the thread not to twine backwards into recreation, but to spin fitfully, searchingly ahead.