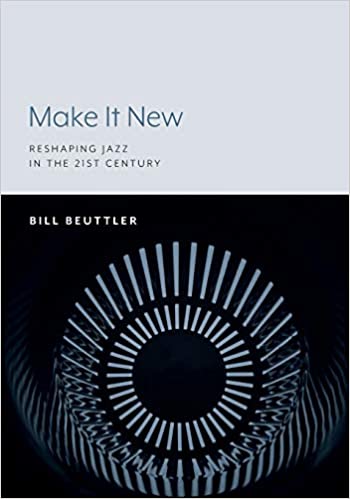 Journalist Bill Beuttler modeled this book after Joe Goldberg's Jazz Masters of the 50s (Macmillan Publishing Co, 1965). It devoted a chapter each to a dozen musicians, providing a snapshot of where jazz stood as it entered the 1960s. Beuttler attempts to give a similar sense of where jazz stands today, through the stories of eight artists who rose to prominence around the year 2000. The chapters read like magazine profiles, giving readers the option of reading them in whatever order they prefer. The main challenge was deciding which artists to include, and as the book's title implies, there is an agenda behind the choices.

He was looking for musicians who were taking jazz to new places, as opposed to carrying on styles which were already being established when Goldberg's book was published. Jazz with both intellectual and visceral appeal was the goal: music which had a chance of appealing to listeners who were not already jazz aficionados. Finally, he wanted people who illustrated how significantly jazz had changed over the fifteen years between 1987 (when Beuttler left his editing job at Downbeat) and 2002 (when he started writing weekly on jazz for the Boston Globe).

A lengthy introductory chapter discusses the stylistic question in depth. Many of the profiled musicians are not entirely comfortable calling their music "jazz," but this is a question as old as the music itself. Even the Jazz at Lincoln Center Orchestra led by trumpeter Wynton Marsalis has moved beyond solely embracing jazz's past to playing a mix of original and repertory pieces. There is a sense that jazz on the move again, as it has periodically done throughout its history, which includes a fresh emphasis on social activism. The chapter also introduces all of the musicians that Beuttler interviewed for the book for the eight profile chapters that follow, so in a sense it functions as an overview or summary as well. While each of the profiles includes discussion of the artist's career and recordings, they are all quoted extensively, so in many ways they tell their own stories (which Beuttler felt was justified, given how intelligent and well-spoken they all were).

The profile chapters are devoted to pianists Jason Moran, Vijay Iyer and Robert Glasper; the band The Bad Plus; saxophonists Rudresh Mahanthappa and Miguel Zenon; clarinetist Anat Cohen; and bassist/vocalist Esperanza Spalding. Their careers have been diverse, but there are common elements. Mentorship is one: Moran with Jaki Byard, Greg Osby and Muhal Richard Abrams; Iyer with Steve Coleman, George Lewis and Abrams; Another is influences outside of mainstream American jazz. Mahanthappa has tried fusion with traditional Indian music; Zenón has explored his Puerto Rican heritage. Contemporary music has made its way back into jazz via The Bad Plus's rock covers, Glasper's collaborations with hip-hop musicians, and Spalding's adoption of a pop persona for her Emily's D+Evolution project. At the same time earlier, pre-bebop jazz has been embraced by Cohen and Moran.

Of course it is far too early to know if this group of musicians will reach the legendary status of the masters in Goldberg's book about the '50s. Moran himself told Beuttler "We don't know how it's going to go, either...in fifteen years we'll really get to see what happened." But in the meantime it is a fascinating read. It sent this reader back to listen to many of the recordings discussed, surely one good success measure for any book about contemporary jazz.