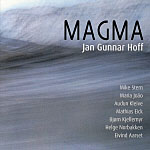 Keyboardist Jan Gunnar Hoff may not have the international visibility of fellow keyboardist Bugge Wesseltoft, but with a growing discography dating back to the mid-1990s and including, most recently, the powerfully fusion-esque Jungle City (Alessa, 2009), with fellow countryman/bassist Per Mathisen and ex-Weather Report percussionist/drummer Alex Acuna, that deserves to change. At the core of the eminently accessible yet equally deep Magma is a Norwegian posse that includes drummer Audun Kleive and bassist Bjørn Kjellemyr—two-thirds of guitarist Terje Rypdal's internationally renowned Chasers trio—as well as trumpeter Mathias Eick, whose 2008 ECM debut, The Door was one of the year's best.

A compelling blend of Nordic lyricism, fusion energy, and a hint of Latin, Hoff's recruitment of Portuguese singer Maria João—paradoxically fragile and avant-tinged —makes compositions like "Earth Song" reminiscent of early-1990s Pat Metheny Group. Guitarist Mike Stern might appear to be a ringer, but he's no stranger, having toured with Kleive as a leader and as part of vibraphonist Mike Mainieri's Steps Ahead. Here he delivers some of his best playing in years; perhaps being outside the comfort zone of his own writing, he's pushed into new areas that eliminate some of his inherent predictability. Certainly, on the atmospheric title track, he sounds both like him and unlike anything he's done before. Hoff's melancholic melody, doubled by Stern and Eick, creates a haunting set-opener that acts almost like an overture of what's to come.

But the following track, "Life," quickly distances itself from any suggestion of Nordic cool; a bright, funky tune that provides a shifting harmonic context for powerful solos from Eick and Stern—bolstered by Hoff's overdriven electric piano—that demonstrate their individual approaches to weaving through and around changes. Hoff closes the tune with an even fierier, Jan Hammer-esque synth solo—a modal excursion over a visceral pedal point that ratchets up even further when he kicks in a dissonant harmonizer, delivering some of Magma's hottest moments. Stern matches Eick's economic melodism, delivering some of his most poignant playing in years on Hoff's gospel-tinged ballad, "Journey Home."

Norwegian guitar wizard Eivind Aarset guests on a handful of tracks, playing far more guitaristically than on his own albums, like the sonically expansive Sonic Codex (Jazzland, 2007). Hoff's solo builds with inevitability on "Earth Song," supported by some very Cuong Vu-like atmospherics from Eick, but Aarset then changes the complexion entirely with a heavily distorted, whammy bar-driven solo that's true to his Rydal roots, yet demonstrates a harmonic sophistication less overtly heard in the context of his own more textural work.

Throughout, Hoff's writing and playing possesses an almost pop-like clarity and concision, but with a far richer vernacular. Released on the Norwegian Grappa label, Magma's lack of international distribution is the only thing preventing this vividly appealing album of attention-grabbing writing and even more convincing playing from attaining Hoff the broader audience he clearly deserves.