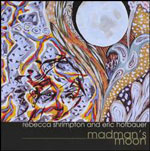 The American songbook is given a new facelift on Madman's Moon with jazz guitar and avant-garde vocals uniquely interpreted by Eric Hofbauer and Rebecca Shrimpton, respectively.

Hofbauer's guitarist prowess has been noted with his work with the jazz group known as the Blueprint Project and his eccentric solo effort American Vanity, which made a singular statement against the jazz guitar status quo. Shrimpton is a simply exquisite vocalist whose alto is endowed with richness, clarity, and eclecticism. Her recent contributions have been heralded with such jazz notables Steve Lacy and Boston's Jazz Composers Alliance Orchestra, as well as concerts on PBS and NPR.

The duo gives new spins on familiar and unfamiliar songs, taking the freedom to try different approaches to the standard jazz vocal songbook. Shrimpton's crystal vocalizations are perfectly matched with Hofbauer's detailed string work, resulting in dance-like accompaniment on free jazz icon Sam Rivers' "Beatrice. On the ballad "For Jan (From Sweet Time Suite), the vocal and string textures are striking, with fine additional contributions by saxophonist Allan Chase and bassist Scott Barnum. Though some of the renditions are slightly off-center, like the jagged version of "Be Anything, they are thoroughly enjoyable and give new life to time-weathered favorites like "Pure Imagination.

The sound is superb throughout the recording, as is apparent as each instrument distinctly adds to the somber persona of "I'm in a Mood. One of the highlights, whether in or out of the holiday season, is the fun remake of the Dr. Seuss classic "You're a Mean One Mr. Grinch, now adorned with a funky free jazz groove, sassy vocals, and a little spoken word. The duo and guests are to be commended for their performances and their willingness to think outside of the proverbial jazz vocal box.

Bill; Beatrice; For Jan (From Sweet Time Suite); Be Anything; I've Got a Crush on You; Walking with Sam; Small Day Tomorrow; Pure Imagination; I'm in a Mood; One Life to Live; Angel Eyes; You're a Mean One Mr. Grinch.

About Rebecca Shrimpton and Eric Hofbauer