By TROY DOSTERT
October 7, 2020
Sign in to view read count 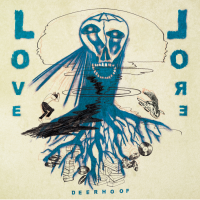 "Where, in short, are the flying cars?" So asked David Graeber in 2012, in a widely-circulated essay entitled "Of Flying Cars and the Declining Rate of Profit." Graeber, an anthropologist of a decidedly unconventional bent, dedicated much of his academic career to challenging preconceived wisdom concerning the allegedly unlimited potential of capitalist economics and its attendant innovations to guarantee an ever-brighter future for the planet. His essay is quoted at some length during Deerhoof's Love-Lore, a delightfully bizarre yet somehow perfect soundtrack for the twenty-first century. A "medley" of 43 discrete pieces of music from a bewildering array of artists in just 35 minutes, it is the ideal counterweight to futuristic promises of a better tomorrow. Instead of celebrating groundless utopian fantasies, the band offers to us needed resources for survival—a chance to brace ourselves for whatever is coming by rededicating ourselves to the power of music at its most elemental, life-giving level.

One can see this as a "cover album" companion to Deerhoof's prior release from 2020, Future Teenage Cave Artists (Joyful Noise Recordings), a "concept" record of sorts which explored the same post-civilizational terrain. From which musical material might we find cultural sustenance when all the familiar signposts are gone? The answer seems to be: just about anything. Only a postmodernist musical sensibility like Deerhoof's could manage to find room for John Cage, Ornette Coleman, Derek Bailey, Igor Stravinsky, the B52s, and Sun Ra on the same recording, let alone combine them in a way that seems eminently reasonable. Few efforts have come so close to fulfilling Duke Ellington's injunction to make music that is truly beyond category.

Even those already familiar with the band's technical proficiency will marvel at its ability to fuse its punk rock spirit with avant-garde classical and jazz repertoire. Guitarists Ed Rodriguez and John Dieterich, recorded here in pristine clarity, are as able to do justice to Coleman's "In All Languages" as they are to pummel their way through thrash metal giants Voivod's "Macrosolutions to Megaproblems," while drummer Greg Saunier and vocalist/bassist Satomi Matsuzaki anchor the group's rhythmic vitality on Sun Ra's "They Dwell on Other Planes" and Parliament's very funky "Unfunky UFO."

One of the album's pleasures involves going through the extensive songlist and trying to determine exactly what one is hearing. Some fragments are simply too fleeting to pick up on, and others are combined within other pieces, adding to the album's hybrid texture. How do we get from Stu Phillip's "Knight Rider" TV-theme song to Eddie Grant's pop-reggae hit "Electric Avenue," while somewhere in between finding Mauricio Kagel's "Music for Renaissance Instruments"? And can the band really be turning on a dime from the "Jetsons" theme to Anthony Braxton? While solving these puzzles can be a maddening experience, it's an irresistible one, even if in the end it may miss the ultimate point of the music.

For despite the mind-bending juxtapositions and sometimes overly clever references, it's to the beauty of song that Deerhoof returns again and again. The lengthier pieces here—particularly Brian Wilson/Van Dyke Parks' "Wonderful" and the Velvet Underground's "All Tomorrow's Parties," both of which are played in full—are compelling precisely for the timelessness and simplicity they possess. While Deerhoof's deconstructionist aesthetic has an admirable appeal, it's the group's love of a memorable melody and a killer groove that continues to be its strongest, most defining attribute.