By BRUCE LINDSAY
February 24, 2011
Sign in to view read count 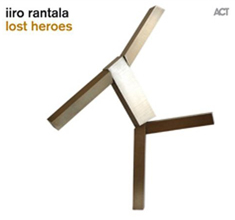 German record label ACT Music is rapidly cornering the market in stylish solo piano albums. With Finnish pianist Iiro Rantala's Lost Heroes, it adds another distinctive and glorious recording to its collection, alongside Gwilym Simcock's Good Days At Schloss Elmau (2011) and Danilo Rea's A Tribute To Fabrizio De André (2010), among others.

Rantala has been a jazz musician for many years, most famously with Trio Töykeät, a superbly skillful and inventive band which existed for almost 20 years until it split in 2006. He is also a popular presenter on Finnish TV. This is his first solo album and, like Rea's CD, Rantala's Lost Heroes is a tribute—in this case, to ten of Rantala's musical role models, from Jean Sibelius to Art Tatum and Esbjorn Svensson.

Eight of the tunes are Rantala originals. Charlie Parker's "Donna Lee," dedicated to Tatum, and Toots Thielemans' "Bluesette," in tribute to Oscar Peterson, are also included. Every performance is a joy: stylish, creative, precise and imbued with warmth.

"Pekka Pohjola" is dedicated to Rantala's fellow Finn; musician and composer Pekka Pohjola, who died in late 2008. It's one of the disc's most graceful and lyrical tunes; Rantala's sadness almost palpable, particularly in the middle section, when his playing becomes more strident and powerful. "Tears for Esbjörn" is equally beautiful: played with economy and space its simple, delicate melody is achingly lovely.

Other tunes display Rantala's more playful side, a sense of humor that translates readily into musical ideas. "Can't Get Up" is dedicated to Jaco Pastorius and, as befits this legendary bassist, Rantala plays the entire tune on the bass keys, hammering out a powerful rhythm with both hands. His tribute to Erroll Garner, a player who "puts a smile in my face," is the angular, jagged, "Thinking of Misty," filled with melodic twists and turns as well as an insistent tick-tock rhythm. "Donna Lee" is another playful performance, Rantala's fingers skipping across the keys as he mixes stride and bebop phrasings.

It's difficult to praise Lost Heroes too highly. Rantala's international profile may not be as high as other jazz pianists, but he is a hugely talented artist, with a powerfully emotional approach to his playing and a good-natured sensibility that some better-known players could do well to emulate. Rantala's heroes may be lost, but they still resonate in the hearts and minds of many people. Lost Heroes is a superb tribute; a giant of an album.