For many jazz fans, pianist Lonnie Liston Smith irredeemably blotted his copy book decades ago. Right enough, for Smith's smooth jazz and quiet storm albums of the 1980s and 1990s were bland, blissed-out, insubstantial affairs. But between 1965, when he was featured on saxophonist (Rahsaan) Roland Kirk's Here Comes The Whistleman (Atlantic), and the early 1970s, when he was a member of trumpeter Miles Davis' electric group, Smith was not only on the page, he was helping to write it.

From 1969-73, Smith was a key player in the astral jazz movement led by pianist/harpist Alice Coltrane and saxophonist Pharoah Sanders. It was Sanders who made the first fully-formed astral jazz album, his Bob Thiele-produced Impulse! debut, Tauhid (1967). Smith was featured as pianist (and occasional co-arranger) on five Sanders albums: Izipho Zam (Strata-East, 1969) and Impulse!'s Karma (1969), Jewels Of Thought (1970), Summun Bukmun Umyun (1970) and Thembi (1971). Smith did not work with Coltrane: she played all the piano she needed, plus the harp and Wurlitzer organ.

In Sanders' bands, Smith approximated the sweeping harp and piano glissandos which were emblematic of Coltrane's spin on astral jazz. He also added block chord accompaniments more redolent of McCoy Tyner (an early influence), and fit into the music's hummable melodies and vamp- and ostinato-driven grooves like they were made for him.

With Sanders, Smith played a supporting role, but an important one. The trouble, the intimations of quiet storm, came when Smith started leading his own band, the Cosmic Echoes. Well, not exactly when he started. The group's debut, Astral Traveling—produced by Thiele for Flying Dutchman, the label he set up on leaving Impulse! in 1969—was rooted in the sound of Sanders' bands. Revisited almost 40 years later, it still has weight.

Astral Traveling leads off with two tunes associated with Sanders: the title track, written by Smith, which Sanders and Smith had recorded on Thembi, and "Let Us Go Into The House Of The Lord," a traditional gospel tune which they had recorded on Summun Bukmun Umyun, where it had been arranged by Smith. George Barron, the Cosmic Echoes' saxophonist, is not in Sanders' league, technically or conceptually, but his soprano is pleasing enough on both tracks. His multiphonic tenor solo on "I Mani (Faith)" is more memorable. 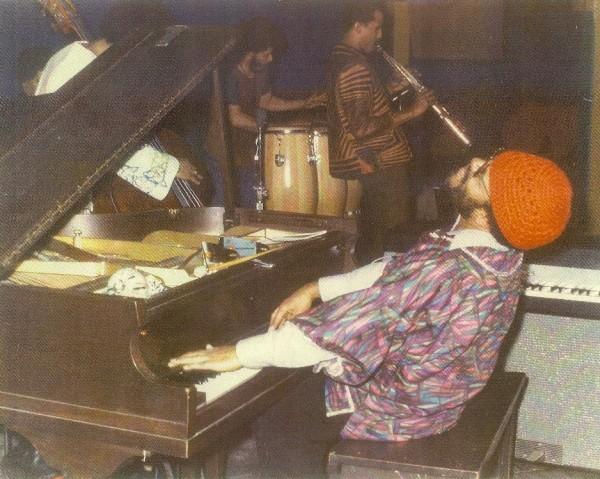 The Cosmic Echoes circa 1974


Smith, who is mainly heard on acoustic piano, solos infrequently, and approaches Astral Traveling much as he did Sanders' albums: embellishing the melodies and subsuming himself in the collective groove.

The other musicians—anchored by bassist Cecil McBee (a frequent member of Sanders' lineups) and drummer David Lee Jr—drive the ostinatos and add color. There are three percussionists, including conga player James Mtume and tabla player Badal Roy (both Sanders alumni), and on "In Search Of Truth" (at 7:08, the longest track), Geeta Vashi is heard on tamboura, astral jazz's signature instrument.

At no point does Astral Traveling reach the heights of Sanders' or Coltrane's contemporaneous albums, but on "Rejuvenation," "I Mani (Faith)" and "In Search Of Truth" it gets close enough. Recent CD reissues have included alternate takes of all three tracks. Anyone bitten by the astral jazz bug is sure to find plenty to enjoy on the disc.

Sad then, that Smith's subsequent Flying Dutchman releases moved steadily towards smooth jazz and cocktail funk. 1974's Cosmic Funk had its moments, as did, to a lesser extent, the same year's Expansions. But by the time the synths and disco beats moved in, on 1975's Visions, it was bye-bye Lonnie Liston Smith for most of the jazz world.

(A half dozen Pharoah Sanders/Alice Coltrane albums of the early/mid 1970s were reissued in October 2011 in Impulse!'s 2-on-1 series and are reviewed here).