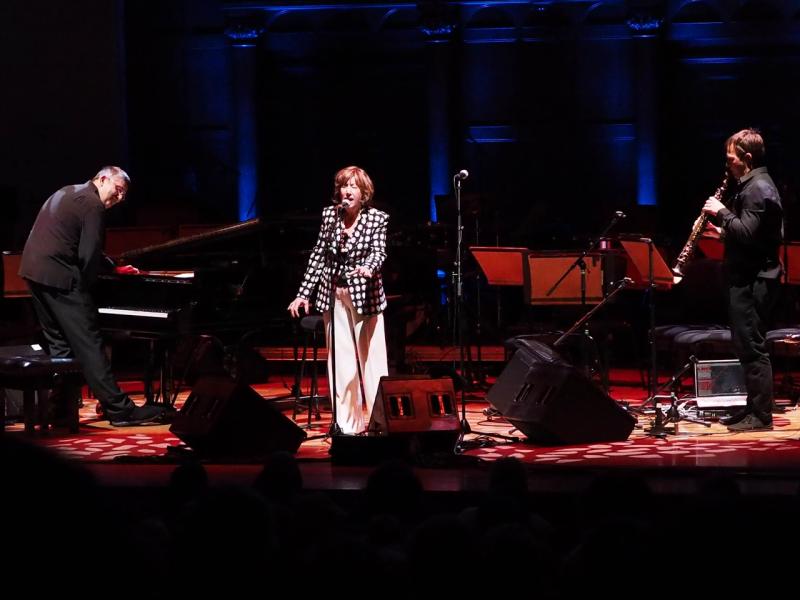 By DUNCAN HEINING
November 25, 2016
Sign in to view read count
The London Jazz Festival, now in its 24th year, straddles the capital—its noble aim, as ever, is the provision of musical succour for the diverse tastes that make up the larger British jazz audience. You want mainstream, you'll find it. Looking for fusion, then look no further. Free jazz, bebop, blues? Step this way. Postjazz? Postjazz? I'm sure I saw it here somewhere.

The first Sunday caught James Blood Ulmer at the East End's Rich Mix. Backed by bass and drums, Ulmer growled his way through a set drawing largely on his 1980 release Are You Glad to be in America?. Not after Trump's election, I'll bet. There was something almost lackadaisical about Ulmer's performance, a meander down paths once trod, perhaps. But it was highly effective and affecting—like a cross between John Lee Hooker and Jimi Hendrix.

Nothing for me, then, until Wednesday night with Norma Winstone, one of the world's truly great vocalists, at the Cadogan Hall. Festival promoters, Serious in company with the Royal Academy of Music, had pulled out all the stops to celebrate Winstone's 75th birthday. The first set featured the European Trio with pianist Glauco Venier and Klaus Gesing on woodwinds was topped by a sumptuous version of Tom Waits' "San Diego Serenade" and a glorious "Lipe Rosize." The second half saw Winstone with the Royal Academy of Music Symphony Orchestra and Big Band conducted by Head of Jazz Nick Smart. Most of the arrangements were taken from the work of the late Steve Zegray and this gave the set a wonderful sense of coherence. Winstone's own, Sondheim-like "Ladies in Mercedes" was the highlight, with Kenny Wheeler's "Sea Lady" (lyrics by Winstone herself) a close second.

Composer-pianist Mike Westbrook has celebrated his 80th birthday year with Paris, a jewel of a solo album, and on the last Saturday performed the music live at King's Place. Having praised the CD already on All About Jazz, the music made even more sense to me live. Westbrook used his own compositions—and those of Ellington, Strayhorn, Lennon & McCartney and others—as the basis for a series of harmonic re-examinations, playing with intervals and chord substitutions to create new voicings and new ways of hearing this music. "View from the Drawbridge" was a remarkable essay in recomposition, while "Anthem," which featured Wilfred Owen's poem "Anthem for Doomed Youth"—it was the 100th anniversary that day of the disastrous, last battle of the Somme—showed that the passion and commitment that underpins Westbrook's art still burns.

The last Sunday brought Carla Bley and the Liberation Music Orchestra to the Cadogan Hall. Featuring music from the band's most recent album, Time/Life, in the absence of founder Charlie Haden, it was a bit like Hamlet without the prince. (We know why God takes all the good ones but why doesn't the Devil pick up his options?)

The LMO's performance, with its virtuosic collection of soloists, restated for these dark times the values of jazz—its transcendence of oppression, its trust in human creativity and in improvisation as a uniquely human quality. "Blue in Green" was a beautiful reframing of the Miles Davis' original, while Carla Bley's horn charts for the lovely "Not in Our Name" rang out with determination. But it was the closing sequence of "America, the Beautiful," "Amazing Grace" and Haden's own "Song for the Whales," that spoke most loudly of the life and music of Charlie Haden and of the importance of Carla Bley in helping him realise his musical vision. Fortunately, Haden's music is still with us. Sadly, so are the evils he fought against.