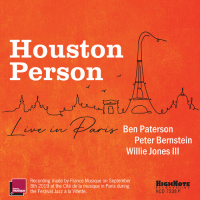 The greatest jazz musicians have one trait in common; they make everything sound so ridiculously easy that listeners are liable to lose sight of the blood, sweat and tears which brought them to that pinnacle. Tenor saxophonist Houston Person, an octogenarian who keeps sidestepping every obstacle including Father Time, is one such master; regardless of groove or tempo, he seems perfectly at home, never letting an audience see him sweat, even on flag-wavers such as "Lester Leaps In," one of eight well-chosen numbers on Live in Paris, an impressive and tasteful hour-long concert recorded at the Festival Jazz a la Villette in pre-covid September 2019.

Person comes from a line of free-wailing tenor saxophonists that dates back at least as far as Dexter Gordon, Eddie "Lockjaw" Davis, Gene Ammons and Sonny Stitt and includes Lucky Thompson, Wardell Gray, Johnny Griffin and Hank Mobley, among others. Known primarily as a peerless balladeer, Person spreads his wings in Paris to embrace not only ballads but blues, bossas and burners. Having blown his way through the Great American Songbook many times by now, he makes only one stop there—Marvin Hamlisch's "The Way We Were"—focusing instead on enticing themes by Griffin, Benny Carter, Billy Taylor, Buddy Johnson, Bobby Hebb and Lester Young (the aforementioned "Lester Leaps In"). Person himself wrote the swinging, bluesy finale, "Jean-Jaures Shuffle."

The tenor titan chooses his sidemen as carefully as he does his themes. Even when you are the featured soloist, it is good to have three bandmates who are exemplary in that area as well. Guitarist Peter Bernstein, organist Ben Paterson and drummer Willie Jones III are called on often, and each one confirms Person's unerring judgement. Bernstein is the first to step forward, on Griffin's light-hearted blues, "Sweet Sucker," which precedes Carter's mellow bossa, "Only Trust Your Heart," and Taylor's aptly named "Easy Walker," which swings hard at a medium tempo. The even-tempered "The Way We Were" sets the stage for the session's flame-thrower, "Lester Leaps In," on which Jones takes a sharp and invigorating solo while Bernstein and Paterson pull their weight. A second ballad, Johnson's "Since I Fell for You," leads to the bright, melodic "Sunny" and frisky "Jean-Jaures Shuffle," during which Person introduces the members of the quartet and bids the audience goodnight.

An hour well spent, for concertgoers and listeners alike. Whatever imponderable talent it takes to stay at the top of one's game for almost six decades, as Person has, he still has it in abundance. Live in Paris certainly bears that out.

Sweet Sucker; Only Trust Your Heart; Easy Walker; The Way We Were; Lester Leaps In; Since I Fell for You; Sunny; Jean-Jaures Shuffle.