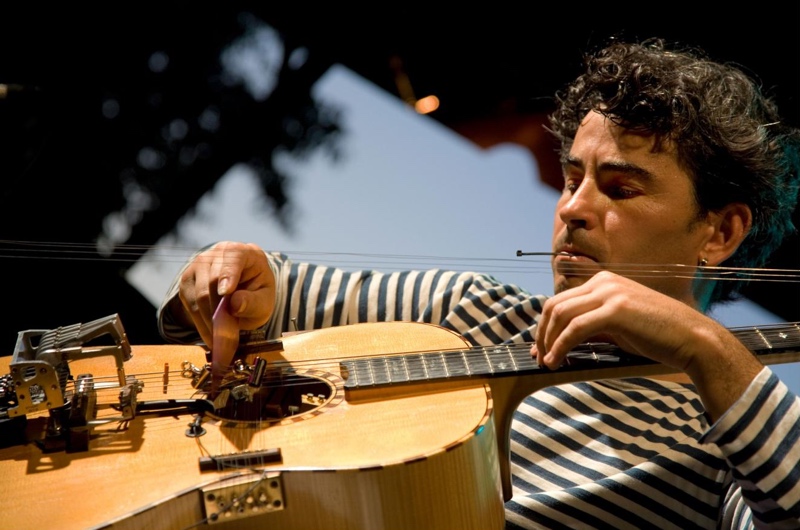 On this double-billed evening, acoustic guitars were found in their extreme opposites states, spreading from purity to perversion. From South Africa, Derek Gripper plays a natural axe, amplified only modestly, direct into a respectfully- distanced microphone. From Sardinia, Paolo Angeli plays an acoustic guitar that has been heavily modified, attaching parts that force it into the cello position, employing mechanical toe-controlled robot-fingers to sketch out basslines, tiny propellers that produce sympathetic drones, and plugged into a tangled tumbleweed of effects units and knotted leads. His instrument couldn't exist much further away from the core body of a traditional guitar, except that all of his enhancements don't actually corrupt the body in the eye of their hurricane.

This was the final date of an extensive tour, courtesy of the Making Tracks organisation, usually a guarantee of imaginative excellence. Gripper played first, perhaps wisely, given that his subtle shimmer represents the sonic starting point of the guitar, even if his chosen style and repertoire are the factors that make him an unusual practitioner. Gripper is immersed in the sound of the kora, devoting himself to the transposition of this West African harp-lute onto the guitar. This is not entirely unusual, as several Malian and Senegalese artists have also made similar translations, often upgrading to electric guitars. Not least Ali Farka Touré, who Gripper chooses as one of his chief composer-sources.

Gripper opens with an inconclusive Benjamin Britten sketch, but after this introductory flourish, most of the music to come was kora-shaped, teeming with detailed percussive curlicues and simultaneous decorative shimmers. The other exception to this repertoire is the Johann Sebastian Bach "Chaconne" that arrives near set's end. Gripper has a throwaway, nonchalant demeanour, both physically and in his string-delivery, creating an illusion of ease. He makes sudden flurries, followed by unexpected pauses, sometimes humming along to the melodies. Gripper's technique is astounding, and it's surrounded by a warm emotional halo, particularly during the majority Afro-songbook entries. A pair of tunes by Toumani Diabaté are chased by Touré's "56" and then a piece by the South African mouth-bow player Madosini. Gripper clearly enjoys the transformation process from alien instrumentation, onto his own strings. As Touré apparently told him, it's a lifelong frustration, making six strings sound as good as one..!

Barefooted, clad in a striped shirt, Angeli's virtuosity lies in his sonic taste, rather than a desire to seek particularly elaborate finger-entanglements. His mission is to fly way beyond conventional technique, utilising his guitar-hybrid as a sound-painting tool, always aware of the further vistas. Spending much of his set bowing the strings in cello fashion, he's involved with heavy atmospheric weight, drowned in deep colours. The exposed tootsies are necessary to the manipulation of Angeli's mechanical bass-claws, visibly crawling across the strings below his guitar body's sound-orifice. He opens his set by singing a capella, entering the NCEM's converted church space with finger in ear, singing just like he's at home in a Sardinian village, traditionally steeped. Mostly, Angeli's changeling guitar results are impressive, but there is occasionally a danger of the trimmings being a distraction, turning certain sections into an demonstration of available instrumental strategies rather than a pinpointed set of either compositions or improvisations. This is a valid and worthwhile risk.

Surprisingly, by the time of this final night, the pair still hadn't played as a duo, but this was the way that they chose to close the evening, and the tour, offering an improvisation that seemed more of a challenge for Gripper, who sometimes resorted to making basic percussive patterns. Angeli is probably much more familiar with the act of spontaneous adventure. Soon, a pulse picks up, as Gripper unspools a cyclic figure, whilst Angeli bows with a mournful sustain. In the end, they were happily united in the unknown, following a few minutes of hesitant exploration.

Straight after the early conclusion of the above gig, there was still time to catch the second set up at The Black Swan Folk Club. The Cornish father of what has become a West Country folk clan, the affable Geoff Lakeman prefers a gentler, more relaxed, old school troubadour stance, seated simply with his concertina, weaving tales and singing ditties with equal naturalness. The earlier set was apparently lodged within the hardcore folk tradition, concentrated on Lakeman's recent late- entry, guest-studded debut album. This second set shifted emphasis towards a wider repertoire of rootsy song.

Lakeman gives Richard Thompson's "Waltzing For Dreamers" a hazy, slow-swaying motion, then offers the Hank Williams chestnut "You Win Again," coating each of these in his own style, strongly possessing them, and all of the following songs. It's not too long before Lakeman coaxes the surprisingly scattered audience into a few singalongs, not that they require too much persuasion, warmed as they are by his cheery wit. A certain sepia melancholy accumulates with Randy Newman's "Louisiana 1927," eliciting a sad communal voicing, and this set represented surely one of this club's most successful, unaffected singalongs in a long while, with the garrulous Lakeman at the helm. "The Road Together" is a Máirtín O'Connor tune that appears on Lakeman's album, heard without that track's voice or cello, just as a jaunty instrumental miniature. A further invasion of country music upstairs at the Swan, as "Peach Pickin' Time" lends a chance for yodelling in the Jimmie Rodgers style. Further 'enthusiastic' audience participation ensues! Lakeman ends the evening with "I Only Have Eyes For You," completely peaking the communal vocal experience. Lakeman is the perfect folk club host, chortling as he imagines his legacy being "The Doggie Song" from his album, a humorous ditty that's becoming a runaway encore favourite.

The University Of York Jazz Orchestra characteristically works under the direction of guest composers, with John Warren taking the helm on this occasion. A Friday night gig succeeded in filling out this lower level space, situated by the River Ouse, with the added bonus of tenor saxophonist Iain Dixon delivering many of the solos during these two sets. Dixon and Warren are long established on the British scene, although representing different generations. Warren is actually Canadian (from Montréal), though he settled in England during the 1960s, and is now actually living in York. For decades, he has worked alongside a peer group that includes Mike Westbrook, John Surman, Kenny Wheeler, John Taylor, Henry Lowther and Alan Skidmore. This gig revolved around Warren's original works, with only a scattering of other composers represented. Dixon began his career with the BBC Big Band, and has recently joined The Impossible Gentlemen. In-between, he's been a heavy presence on the UK scene, not least with the Creative Jazz Orchestra, and in collaboration with guitarist Mike Walker. For the last decade he's maintained a key presence in Bryan Ferry's band.

The musical styles represented were very varied, as Warren has a penchant for dealing with different forms, ranging through salsa, funk, swing, township jive, calypso and bossa nova, although the last two were provided by John Surman and Antonio Carlos Jobim. Warren namechecked fellow composer George Russell at one stage, and that American's strutting freedom-funk does indeed make its mark on this leader's signature style. The Orchestra locked onto Warren's works with enthusiasm and precision, though didn't relax into confidence often enough to make the material truly storm. The presence of Dixon tended to raise the level of soloing toughness, although his fellow saxophone ranks contributed effective competition at times, particularly when sidestepping into a softer, breathier spaciousness. Guitarist Carlo Estolano also shone out on several numbers, leading the rhythm section through Jobim's "Wave," which was also a showcase for Dixon (again). The first set climaxed with "Brother McGregor," which was inspired by Warren's experience of arranging Chris McGregor's "Andromeda" for The Dedication Orchestra, harking back to the massive influence the exiled South African Blue Notes had on the British jazz scene in the 1960s and '70s.

The Dixon outpourings continued to be impressive during the second set, notably during "Detroit Rundown," with its persistently funky thrust. Surman's "Calypso Red" isn't one of the reedsman's works that's embedded with his usually marked stylistic distinctiveness, this incarnation acting instead as a pastiche, but nevertheless a rousing pastiche. J.J. Johnson's "Lament" was an arrangement suggested to Warren by Norwegian singer Karin Krog (who's still regularly appearing with Surman these days), with an expectedly fine solo from Dixon.