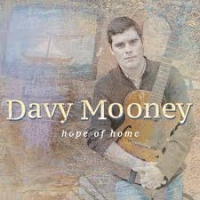 For many, if not most musicians, much time is spent on the road performing, with one's "home town" many times just a short stop on the endless tour. It is hard enough to maintain a steady relationship, much less than that with a spouse and possibly family for the "normal" person, than someone who must travel to earn a living.

On a larger time scale, guitarist Davy Mooney's latest, very fine release Hope For Home is about the same things: dislocation and relocation, fleeing and returning. A New Orleans native, Mooney was forced to leave the city (and his house) as hurricane Katrina bore down. Making the best of the situation, Mooney entered the 2005 Thelonious Monk International Jazz Guitar Competition, where he ultimately placed third, behind Lage Lund and Miles Okazaki. He then spent two years at the Thelonious Monk Institute of Jazz in Washington, D.C., where he studied with trumpeter Terence Blanchard.

Mooney then made the move to New York City where he met up a number of musicians who had ties to the South, including drummer Brian Blade, pianist John Cowherd and saxophist John Ellis. Along the way, he made the duo 7-string release Last Train Home (Challenge Records, 2009) with famed guitarist John Pizzarelli who was one of the judges at the Monk Competition. In 2012, Mooney released Perrier Street, using Blade, Cowherd and Ellis in the band, as a statement of his connection to its modern jazz scene from the vantage of the New York City scene.

Despite the attractions of the Big Apple, Mooney decided to move back to New Orleans in 2013, and Hope For Home contains music which attempts to convey the conflicting emotions involved in that decision. Mooney wanted to maintain his earlier musical relationships and so, Blade, Cowherd and Ellis, along with bassist Matt Clohesy return. An important part of the feel of the record is that these sidemen are leaders in their own right; see the Blade Fellowship Band's More Than Just A Word, Cowherd's Mercy and Ellis' Charm. Closehy, while not a leader has credits a yard long.

The music itself is gracious, finely honed and deeply felt. Needless to say, the band, with its history and internal self- identification, plays as one. There is a high sheen throughout and the edges are polished. The harmonic movement is smooth as silk, carrying melodic lines which imply rather than implore.

Normally, this kind of music might have a tendency to slip into the background, but Hope Of Home does not, simply because of its emotional honesty. Couched in the language of modern mainstream jazz, Mooney's feelings shine through without shouting; they infuse the entirety of the album, and become clearer with repeated listens.

The title track, "Hope Of Home," shows all of this clearly. The melody seems simple at first, but twists and turns as it progresses. There is a distinct feeling of longing, and a sadness mixed with hope which invites us to share our lives with Mooney.

Each track tells its own story, Mooney's story, and his music tells of the journey he has taken over the years. Each of us has our own journey, and Hope Of Home might, in its own way, help us continue on.

Scarlatina; Ides Of April; Cold, Sober; Hope Of Home; Think So Little Of Me; I'll Be Freeing You; Stutter Step; Peregrine; Intervalis; The Clover; Like Before.