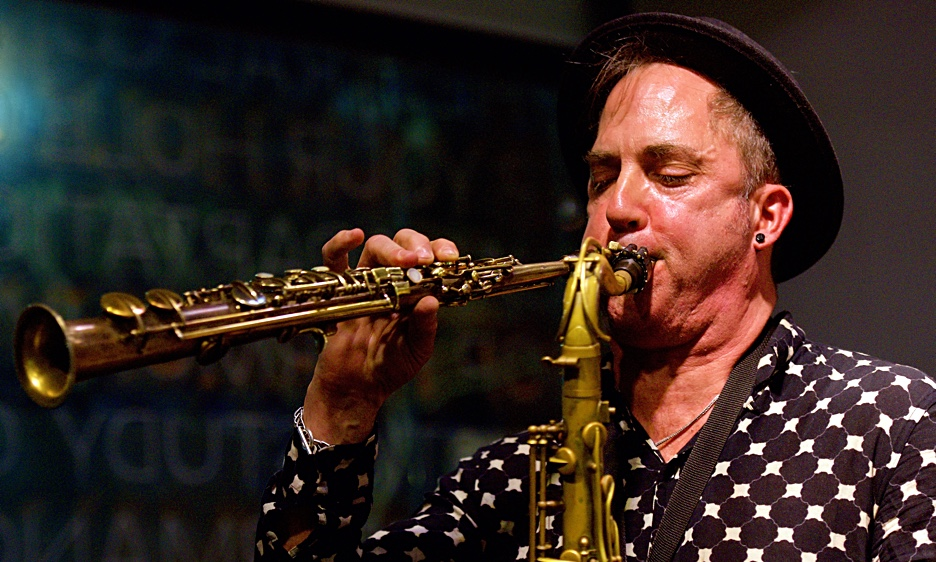 Originally, this gig was billed as The Schlippenbach Trio, featuring a rare NYC showing from German grand master pianist Alexander von Schlippenbach. Anticipation was high, but the day before the show, it was announced that his work visa hadn't arrived in time for flying Stateside. There were fears for a couple of weeks previously that this might happen, but trio compadres Evan Parker (tenor saxophone) and Paul Lytton (drums) had been waiting until the worst possible eleventh hour to make that definite announcement. Meanwhile, they had managed to involve Matthew Shipp as a worthy replacement, therefore creating a different improvising dynamic. They resisted the temptation to re-christen as The Shippimback Trio. The Roulette crowd remained strong, with this Brooklyn experimental music mansion being filled with folks who remained almost equally excited by the prospect of this standby line-up.

Shipp has had an ongoing rapport with the two Englishmen, particularly Parker, so their opening piece swam off with an easy familiarity, each player comfortably settling into a locked balance of enquiry, power, hesitation and ascendancy. Parker had chosen to bring only his tenor horn, straight away deciding on the fulsome burr-unravelling that proceeded in its flow. Shipp has a grander style than Schlippenbach, often with flamboyant classicist gestures rather than Monkish scampering. Even though the German often deals with heavy tune-matter in other band settings, he probably would have entered a spikier realm with Parker and Lytton. Speaking of spiky, the drummer is just as much a percussionist, matching violent density-rattles with soft pushes through a delicate forest, his heads most often cluttered with small objects, or distressed directly by stick-ends, pattering, dragged or softly rubbed. All three players have studied the art of sitting out, engaging with silence whilst the varying other pair engaged in a direct dialogue. The points where that third resting being would re-engage were always sensitively judged, feeling exactly suitable.

The first improvisation was the longest, at around 45 minutes, with their second piece being under 15. As Parker joked afterwards, it was like a second movement. This led the way into an encore, which was shorter, but still sympathetic. Shipp wasn't afraid to push for tunes, at several junctures, but usually catching hold of a phrase that Parker had issued, or vice versa, the two of them exchanging and escalating. It was Parker who caught hold of the highest handhold, his tenor gruffly rearing up for a sustained rattling tearaway gush. He did this two, or was it three, times. Parker also incorporated an extended spiral of buffeting note-flecks, rotating inside a circular breathing cyclone. Lytton had energy too, but his tinkering activity was almost always present as a continual construction or breakdown of compacted tension, full of microscopic detail.

Multi-instrumentalist Peter Apfelbaum's Stone residency opened up with his most multi-instrumental outfit, a trio that also included Marcus Rojas (tuba, etc.) and Cyro Baptista (percussion, etc.). Here, Apfelbaum and cohorts littered the performing space with a multitude of large and small instruments, the 'leader' (of this spontaneous music) moving between saxophones (tenor, c-soprano), piano, keyboards, bells, wood, megaphone and flute.

Perhaps best described as 'avant rainforest,' the music operated on a very visual level, conjuring up an atmosphere of jungle abstraction, a soundtracking for the deepest adventure into alternative exotica. There were tunes, sometimes, emerging out of the roots, swamp tendrils wrapped around straining limbs, but there were mostly environmental paintings, laid across growing groove patterns. Rarely can music sound so adventurous, without relinquishing accessibility.

Apfelbaum began on his cowbell sculpture, as the trio wove tuba drone spittle textures, mock birdcalls, invoking approximate memories of Jon Hassell or Nana Vasconcelos. One hand tocked time on a cowbell, but Apfelbaum's other digits were already exploring his piano keys, also setting up a synth growl-line, Baptista with the shakes and rattles. Apfelbaum softly fluted, and the Brazilian percussionist picked up his pandeiro (tambourine), brushing it softly. As Apfelbaum chose the Moroccan Gnaoua quarakebs (metal castanet equivalents), it had already dawned on the listeners that these three improvisers were gleefully rummaging through their considerable collection like eager children in an attic of wonderment.

At one point, all three were making cuica-rubbing percussion sounds, even though only Baptista was actually playing a cuica. Apfelbaum crackled his voice through a small megaphone, so these sounds certainly weren't all smoothly organic. Baptista twanged his jaw harp, making a duo with Apfelbaum's tenor horn. There was no chance for the audience to take grip or grasp on any moment, as the trio were already off, cutting an instinctive path with their improvising machetes. "Here's the next imaginary situation," says Apfelbaum. Baptista strolled around, striking his berimbau, whilst the saxophonist blew simultaneous soprano and tenor, in the Roland Kirk manner. Rojas soloed on an instrument that looked like a cross between a Vietnamese and Mississippi cigar box two-string axe. Meanwhile, Apfelbaum steadily dropped various small items into the mouth of his largest cowbell. It was a mystical set, frequently barely controlled, free in its curious wandering. For a bandleader who is often concerned with composition and arranging, this is almost certainly Apfelbaum's most untethered outlet.