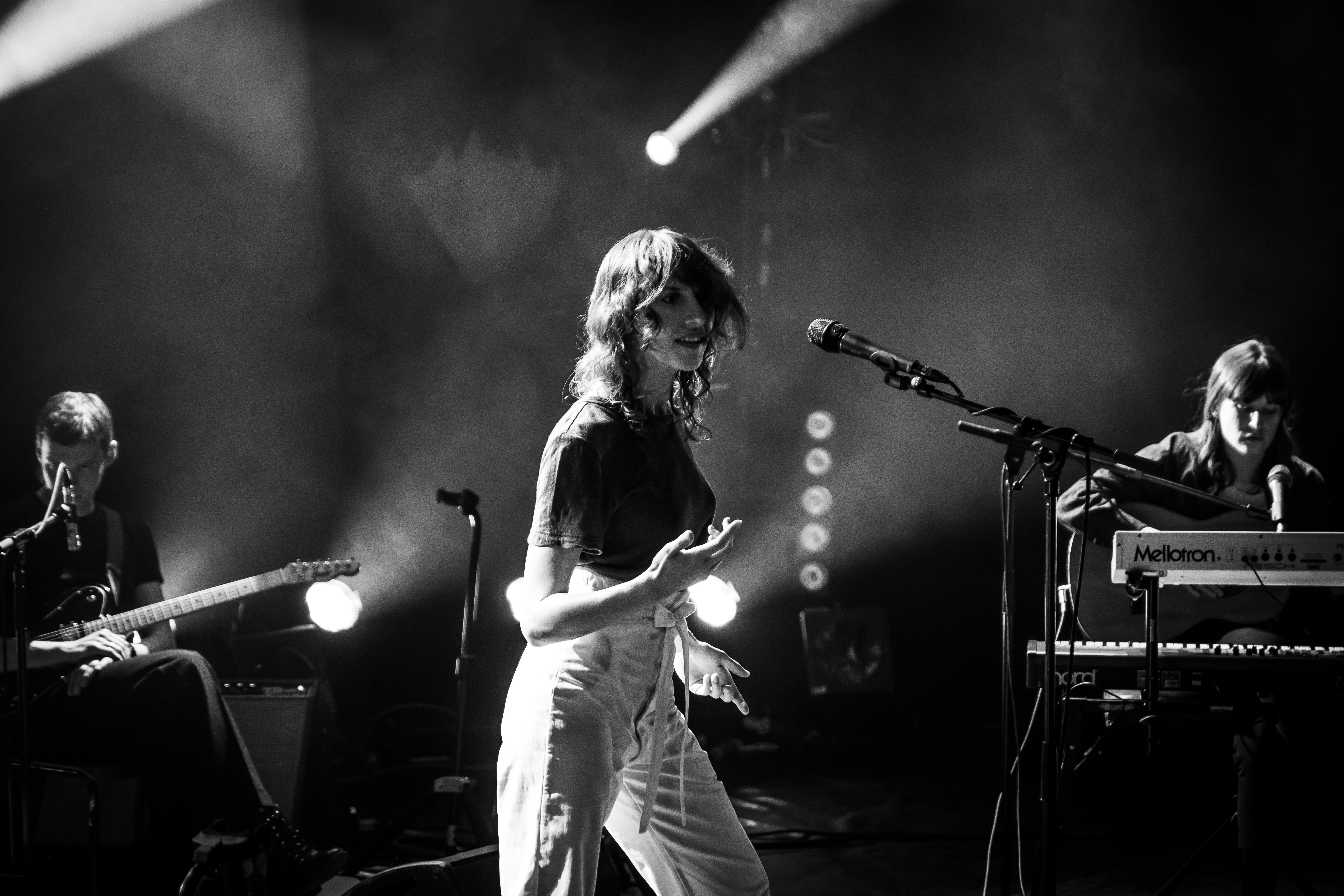 The Rotonde room in Botanique is a pleasingly intimate environment with tiered ledges in, yes, a most-of-a-circle formation. For this unsurprisingly sold out show, right at the beginning of New Zealand singer Aldous Harding's European tour, all space was sardined, but your scribe fortunately found a teetering spot, right at the lip of the entrance steps. Such a crammed crowd imparted an added aura of closeness to a gig which already promised the deeply interior sound of the Harding songbook.

Aided by her skimpy, extremely expressive frame, Harding set about throwing shapes, often oddly eccentric, arms behind back, arms across belly, or one arm placed each way. She stepped long steps, in her high-waisted black'n'white attire, bowed sash, clogfoot shoes suggesting a 1970s glam-look, her hyper-intense gaze scrutinising the audience, as if studying deeply their reactions. She is perhaps unintentionally unnerving.

This is ample description of Harding's demeanour, but her look and behaviour forms a significant part of her communication. Or at least it does nowadays, when compared to a less physically expressive outdoor appearance at the Green Man festival in 2017. Harding has clearly refined her stagecraft to a massive extent. Her voice is powerful enough to cope with her desired impact: a post-Nico intoning, dramatic, doomy, romantic, casual, conspiratorially wafting, relating sometimes frank simplicities, at others, more dreamlike wordsmith imagery.

Now she has a full band, including H. Hawkline on guitar (an old Cate Le Bon band mate, and a sometime solo artist himself), periodically sitting on her high stool with an acoustic guitar, at other junctures, leaving herself free to roam and gesture. At one point, Harding moved to the keyboards, jointly playing beside Mali Llywelyn on the same instrument. During the encore, she even played a coffee mug with a stick, on a briskly rhythmic new song that turned out to be called "Old Peel."

As some kind of relief from the dramatic focus, Harding took it easy between songs, pausing, chatting, joking, procrastinating, before the next specialist-universe ditty began. Then, the bewitching atmosphere resumed. Initially, she gathered the reputation of being a modernist folk troubadour, but the material on Harding's third album encourages a persona that's akin to a mime artist who sings. There's now an archetypal aura that floats back to the images of Jacques Brel, Scott Walker, David Bowie, Nick Cave, and even, oddly, Russel Mael, in his more reflective moments. There aren't many female vocalists who have stalked such paths, but Nico would surely be given first thought. There's a distant, in-character method in place. Curiously, this makes Harding more personal, as the audience are given a wide berth in terms of subjective interpretation, each grasping their own meanings.

The AB Club is this venue's smaller upstairs space, which was fully loaded with punters for blueslinger Samantha Fish's rocketing set. She can sometimes be considered as a Kansas City countryslinger, depending upon which album she's drawing from, but this night's show was mainly devoted to Fish's high volume axe-frazzling blues-rock. Even so, we can still discern the outside American roots influences, always gathering around on the periphery, preventing this from being any rawk-styled clumsiness. Fish has twang, in both vocals and string departments. It's a shame that she only delivered a handful of songs from the countrified Belle Of The West, but their scarcity made them even more incongruous. Backed by a keyboards, bass and drums combo, there were also frequent excursions into jazzed stretching out, particularly on electric piano. The flaming bursts were left to Fish's own solos, but she also took the mood down to a spacious, supper club minimalism. Throughout a substantial set, she maintained momentum via regular switches of dynamic tendencies, from rafter-screaming down to a deep savouring of spaced out phrases.

dEUS are one of Belgium's most successful rock bands, at least outside of that country. They made a significant impact on the alternative UK scene, even if their peak period was two decades ago. They camped out in the main hall of Ancienne Belgique, playing for eight nights, and completely selling out the run. Rarely have we been so sardined inside a venue!

Lead singer and guitarist Tom Barman sported a black kilt, and a team of dancers invaded the stage at strategic power-points. Even though their moves were fairly clichéd, in the modern dance fashion, they still made an impact, heightening the more rocked out portions of the set. The concept, every evening, was to perform the entire contents of The Ideal Crash, the third dEUS album, from back in 1999. Of course, this band lost much of their dangerous sonic edge with the departure of guitarist Rudy Trouvé and bassman Stef Kamil Carlens, prior to The Ideal Crash, and the present line-up possesses more of a conventional rock'n'roll density. Nevertheless, we couldn't argue with the riotous, surging energy within this hall, even if there were scarce moments of spiky fragmentation in the dEUS wall-of-sound. Also, we still had Klaas Janzoons in the ranks, on violin and keyboards. It was rare to hear such a majority of Dutch-speakers around the crowd, hyper-loyal to this Antwerpian crew. Nary a French syllable was uttered on this heaving night!