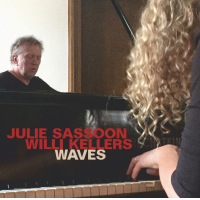 Although pianist Julie Sassoon's first recording—the trio Azilut!'s To the Power of Three (Babel)—was released in 2001, the intervening years have not seen a stream of albums from her; in fact, her releases to date can be counted on two hands. However, in Sassoon's case quantity is far less important than the variety and quality of the music on the releases. In particular, amongst her recordings are two fine solo albums—New Life (Babel, 2006), inspired by the 2004 birth of her daughter, and Land of Shadows (Jazzwerkstatt, 2013)—as well as Fourtune (Jazzwerkstatt, 2016), an impressive quartet which includes Sassoon's life-partner, reeds player Lothar Ohlmeier, who was also in Azilut! Following that solo album and quartet, Waves completes an impressive Jazzwerkstatt hat-trick with a piano-drums duo with the veteran German drummer-percussionist Willi Kellers. Remarkably, despite its running-time of just fifty-five minutes, Waves is a double-disc album, the forty-minutes of the first CD having been recorded live in concert in Munich in May 2017, and the fifteen-minutes of the second one dating from a July 2016 radio recording. Kellers' sleeve notes partly explain how this came about; they also contain his view of their music: "It's made and played simply, without complicated compositions or intricate, virtuosic improvisations, just music from 'heart to heart.'" When Sassoon and Kellers first rehearsed in her studio, she said she had never experienced anything like it. On "The Cormorant," the earliest of the duo pieces here, she sounds subtly different compared to her past recordings—freer, more relaxed. Without forsaking her impressive technique and listening skills, it is almost as if she has shrugged off habits lingering from her classical training. Neither player seems to have qualms or inhibitions about venturing into unconventional territory; the most extreme instance of this coming during "If You Ever Change Your Mind"—the varied opener and the album's longest track—when Kellers plays harmonica, causing Sassoon to slow down and grind to a halt before the two together rebuild momentum after some extemporised vocal interjections. Tellingly, unlike Sassoon's past albums, it is obvious that this music was freely improvised; the way that she nonchalantly slips in a quote from "La Cucaracha" towards the end of "If You Ever Change Your Mind" providing ample evidence for it being improv. The variety and verve of the other, shorter tracks support this. While it is not literally true—as past album cover photos of her long blonde locks attest—it sounds as if Sassoon has let her hair down and relaxed here, not being afraid to bend or even break the rules. She certainly sounds as if she was having fun, a sensation listeners will share. Some duos click immediately while others take time, work and perseverance to get to there; even a cursory listen to Sassoon and Kellers together will reveal their duo is of the first type. For that reason, Waves makes pleasurable listening and should not be just a one-off but the start of a lasting collaboration.

Live in Munich: If You Ever Change Your Mind; Twilight; The Unfortunate Miss Jones; Pygmy Song; Soulplay; rbb session: The Cormorant.