Touch and Go Sextet: Live at the Novara Jazz Festival 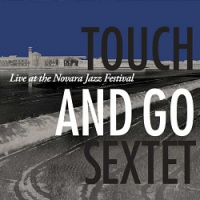 Drummer Vijay Anderson formed the Touch and Go Sextet in the Bay Area as a vehicle for performing and interpreting the works of visiting musicians, but his concurrent studies with alto sax legend Roscoe Mitchell gave him the confidence to steer this three-reed, one trumpet and double-bass ensemble into original compositions, the results of which are clearly realized on Live at the Novara Jazz Festival.

On "Slippin,'" the horns wrap around each other like snakes in mating season, with simultaneous soloing and orbital interplay over bassist Lisa Mezzacappa's powerful ostinato. Clarinetist Ben Goldberg and trumpeter Darren Johnston contribute memorable vignettes. Tenor saxophonist Aaron Bennett explodes with some stuttering Albert Ayler eruptions on "Horripilation," over ominous unisons while Anderson stokes martial cadences up to a violent fever.

Sheldon Brown's bass clarinet and Bennett's bari weave a dark tapestry on "Waldron," while Goldberg and Johnston dart with squirrely filigree until the clarinetist bursts free with a stunning bit of Klezmerish, whinnying freedom.

Over atmospheric cymbal washes and moaning arco, Brown's alto wiggles and strains on the intro to "Delusions," a dark dirge that blossoms into a yearning feature for Goldberg, and a series of through-composed, gorgeous melodies. Anderson's storytelling drum scene opens "Swift House," each stroke and roll leaving an indelible timbral footprint, which eventually triggers an ecstatic scattershot theme that swirls with energy on the Anthony Braxton level. Brown rides the bucking bronco before Goldberg's entry downshifts into a brilliant a cappella episode. Then it's Johnston, sounding a buzzing drone more hornet's nest than trumpet, branching out on a fat, blustery journey that grafts Lester Bowie's warble with Freddie Hubbard's velocity.

Mezzacappa's laconic soliloquy—filled with rubbery glissandi, hammer-ons and turgid whole notes leads off the seventeen minute closing trilogy "Last Kiss/ Dimond Park/ Degrees of Gray," and her malevolent arco sparks extended workouts for Johnston, Goldberg, and the horns, en masse, all cranked into a delirious agitation by the roiling percussion of the leader.

Free-wheeling and as fresh as next-week's newspaper, Live at the Novara Jazz Festival strikes a fine balance between the kinetic and the cerebral and is worth seeking out.

About Touch and Go Sextet