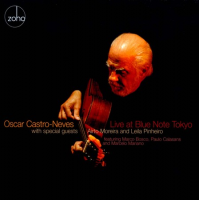 Live at Blue Note Tokyo is a celebration of Brazilian jazz played in one of the foremost jazz clubs in the world—a gathering of old friends and the discovery of new friends, all coming together for legendary guitarist Oscar Castro-Neves. A founding father of the bossa nova musical movement, Castro-Neves became a leading figure in the genre, recording historic albums with Antonio Carlos Jobim, Dori Caymmi and Stan Getz, and touring with the likes of Dizzy Gillespie, Barbra Streisand, Ella Fitzgerald and countless others. On this outing, the guitarist/singer brings together percussionist Airto Moreira and vocalist Leila Pinheiro, both old friends, for an exciting collaboration with new musical partners to record a gem of Brazilian music.

The music is a compilation of performances recorded over a seven-night 2009 stretch at the Blue Note Tokyo jazz club, and features an all-star cast of Brazilian musicians playing three of Castro-Neves' own compositions, as well as songs from Jobim, Moreira, Baden Powell and others. The album was meant to capture only a snapshot of the incredible bossa music produced over the last fifty years. Needless to say, though the fourteen-piece repertoire is diverse, exciting and engaging, it in no way sufficiently documents the history of this great genre with such worldwide appeal. Nevertheless, from the strings of Castro-Neves' guitar, the lips of Pinheiro, and passionate performances from the band, Brazil comes alive with beautiful bossa melodies.

While vocals are certainly the mainstay of this disc, Castro-Neves' original, "My Sweet Sweetiepie," is a gorgeous instrumental collaboration between the leader and pianist Paulo Calasans. The guitarist opens the album with a vocal performance on the lively bossa rhythms of "Ela É Carioca," while on "Ponteio," he is joined by Pinheiro, who provides the lead vocals. There are other notable vocal performances here, including the two Jobim pieces, "Domingo Azul Do Mar/Fotographia," and "Waters of March." The brief but beautiful "Rio" and the classic Powell song, "Canto De Ossanha," are also wonderful vocal spots.

It's been said that jazz seems to be far more popular around the world than it is in the United States, with Japan listed as one country that has fully embraced the music. Audience response to this live recording confirms that the Brazilian sub-genre is just as popular. Led by guitarist Oscar Castro-Neves, one of the most important exponents of the bossa nova, Live at The Blue Note Tokyo showcases an all-star cast of players in a world-renowned setting, delivering the music of Brazil with passion and class.