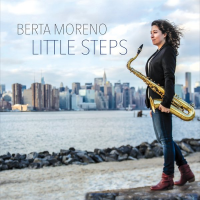 When first seeing the title of Berta Moreno's debut record, one might be tempted to interpret it as a self-effacing gesture. Perhaps the tenor saxophonist is acknowledging her debt to the giant steps of the master of the tenor, John Coltrane himself? Upon further investigation, however, Moreno makes clear in her notes to the album that the piece after which the record is named is really just a reference to the chromaticism behind the song's harmonic and melodic structure (as well as an allusion to the path we take during life's journey). Even so, with self-assured technique and a strong compositional skillset, it's not hard to appreciate the way Moreno continues the tradition established by some of the landmark figures of the tenor sax, even if her sound owes a bit more to Wayne Shorter or Joe Henderson than Coltrane.

All eight tracks on the record are Moreno originals, and what they have in common is a creative use of the harmonic possibilities afforded by her two-and sometimes three-horn lineup, along with some occasional Latin-inflected rhythmic detours. Veteran saxophonists Steve Wilson and Troy Roberts (each featured on five tracks) offer Moreno a colorful palette for her memorable melodies, and the top-flight rhythm section of pianist Manuel Valera, bassist Maksim Perepelica and drummer David Hardy swings formidably on all eight cuts, in addition to being able to turn on a dime when the pieces change tempo or rhythm. "J.G. Power," the album's infectious opener, and the hard-driving "Mind the Gap," are exceptionally good in showcasing the group's lithe musicality and deft interweaving of Latin and bop-derived rhythmic elements. The record's lovely ballad, "Lullaby for Rafi," reveals Moreno's ear for a strong melody, with a gorgeous opening solo from Valera to boot.

As for her own voice on the tenor, Moreno is a highly thoughtful and precise soloist, with well-planned statements that don't waste any notes. Like Wilson and Roberts, her in-the-pocket technique avoids ostentatiousness in favor of measured, swinging improvisational arcs that are enjoyable and accessible.

In addition to the above tracks, "Lost and Found" is a standout, especially evocative of the Henderson classic "Inner Urge," and "Option A," the record's closer, offers a complex head featuring all three horns, not to mention fine solos from all the players. Moreno is off to a terrific start with this debut, and we should be grateful for the successful Kickstarter campaign that helped bring this music into the studio.