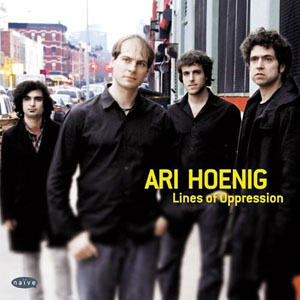 When Bill Evans began building trios that represented a collaboration of equals rather than soloist accompanied by rhythm section, it's unlikely the late pianist could have envisioned the way Jean-Michel Pilc, bassist Francois Moutin and drummer Ari Hoenig wowed fans at a 2011 Ottawa International Jazz Festival performance. Bringing new meaning to the phrase "egalitarian," each and every member was clearly capable of pushing the music in a new direction, so keenly attuned were they to each other. Hoenig, in particular, seemed a mad instigator, grinning fiercely as he pushed his elbow down on his snare hard, turning it from a percussion instrument into one actually capable of melody.

Not that the concept is new, but Hoenig has honed a bit of showmanship shtick into something musical, taking it to the next step on his own Lines of Oppression, where he becomes the lead instrument on Bobby Timmons' classic "Moanin'"—nearly beyond belief, as he ekes notes as blue as they'd sound on a horn. Settling back into a more conventional role as purveyor of a loose swing groove, he passes the baton to guitarist Gilad Hekselman, who demonstrates increasing distance from his earlier touchstone, Kurt Rosenwinkel, with carefully chosen notes, overdriven but in a warm, almost ethereal way. Pianist Tigran Hamasyan's next, and though capable of lithe flights of fancy—and a musical mélange that often brings his own Armenian roots into the equation—in the context of this blues, he demonstrates a deeper appreciation of the tradition, starting with Count Basie-like economy, but gradually picking up steam as his solo, an encyclopedia of jazz piano, gradually unfurls.

There's also a reading of Thelonious Monk's oft-covered "Rhythm-a-ning," delivered with Carl Stalling-like wryness before breaking into a middle section where Hekselman and Hamasyan go at it, head-to-head, for one of the album's more exciting moments. Monk's influence is also felt on a trio version of "How High the Moon," featuring Hamasyan and bassist Chris Tordini, who subs for regular bassist Orlando le Fleming here and on two other tracks, including the pianist's idiosyncratic, rock-edged set-closed, "Higher to Hamasyan."

The rest of the album comes from Hoenig's pen, accounting for two-thirds of its 60-minute duration, the majority of that slice occupied by just two compositions—the quirkily polyrhythmic title track, featuring an early bar-raising solo from Hekselman, and the even knottier "Arrows & Loops," with its preponderance of accented shots amidst a dervish-like melody, leading to Hamasyan's set-defining solo, a combination of choppy voicings and fluid, serpentine melodies. "Wedding Song" proves Hoenig isn't averse to lyricism, though its bittersweet melody seems paradoxical to the song's title.

Whether taking the lead on "Rhythm"—his a capella solo and vocalizations a North American variant on the Indian konnakol tradition—or acting as perpetual rhythmic instigator, Hoenig leads his group democratically, not unlike his work with Pilc and Moutin. Lines of Oppression may feature Hoenig's name on the marquee—and it's clearly his vision driving the group's overall direction—but it's unequivocal that this is a quartet of equals, driven moment-by-moment by the unfettered expressionism of everyone involved.