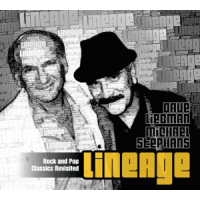 In 2010, saxophonist Dave Liebman and drummer Michael Stephans began tossing around cover song ideas with guitarist Vic Juris, who was featured in the Liebman Group from 1991 through 2012. These conversations were soon joined by bassist Evan Gregor, keyboard player Bobby Avey and woodwinds player Matt Vashilishan. The resultant Lineage, subtitled Rock and Pop Classics Revisited, features songs by such cultural icons of the 1950s and '60s as Elvis Presley and The Beatles. Co-led by the saxophonist whose contributions to bands led by Miles Davis and Chick Corea helped expand the boundaries of modern jazz, the band on Lineage deconstructs rock, R&B and pop classics into...boundary-defying modern jazz.

Gutbucket guitar and tenor sax whip "Tequila" into a froth until the bottom drops completely out, leaving Liebman to freely swing without a net ("a quirky, angular and space funky re-take in 7/8 time," Stephans suggests). In their group improvisation on "Wipeout," the rhythm section keeps churning the original rhythm but Liebman stretches out the melody until it finally snaps. "Walk, Don't Run" dissolves into a hard-charging, piano-less saxophone trio where Liebman's free-fall stretches out the original tune way past the point of recognition. These three tunes use pop to construct jazz that hits as hard as rock.

Liebman and Stephans rework Stevie Wonder's "Visions" to float like a Return to Forever piece behind Liebman's soprano sax and Juris' acoustic guitar, which rings out in beautiful and clear tones ("Visions" was in the repertoire of the 1970s Dave Liebman Quintet that featured guitarist John Scofield).

Joni Mitchell's hopeful melody "Woodstock" morphs into an elegy for the legendary lost peace and love of this era, sung in Liebman's piercing, soaring saxophone. "I Only Have Eyes for You" sounds like a Thelonious Monk construction, especially its breathy piano and tenor sax introduction, which echoes Monk's work with Coleman Hawkins; produced to sound like there's worn vinyl record static in its background, "Love Me Tender" comprises a more dark and sinister piano/saxophone duet straight out of Bertolt Brecht.

"What we'd hoped to do was to 'put old wine in new bottles,' using the language of contemporary improvised music to re-clothe 'the oldies' in new harmonies and new rhythms, without destroying the integrity of the originals," Stephans explains. Mission accomplished.