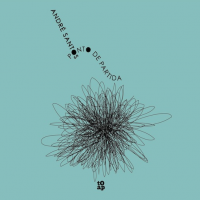 This album is exactly what it says it is: a Ponto de Partida, or "Starting Point" for André Santos, a young jazz guitarist from the island of Madeira, and his band.

What's on offer here is pretty sparse and minimalist but hints at greater things to come. The band has already won a prize in the 25th Portuguese Premio Jovens Musicos awards.

The opener, "Zion" consists of a rather basic guitar- based groove that sometimes promises to open up into something more substantial but never really does.

The reflective ballad, "Reverso da Medalha," The Other Side Of The Coin, takes matters further, with the leader's guitar work more relaxed and adventurous. The piece is marred by some heavy handed drumming by 19-year-old Joao Pereira, though bassist Joao Hasselberg saves the day with a nice solo before close of play.

"Siso," Wisdom Tooth, is... well, a bit of a pain, the jagged, nerve-jangling guitar and tortuous saxophone evoking a visit to the dentist... with no anesthetic.

The title song is easier on the ear, opening with melodic Mediterranean guitar supported by bass before some excellent, laid- back saxophone. Santos' solo, at the difficult end of the fretboard, is impressive.

If not a fado, then certainly fado-ish, "Mutantes" features the combined voices of Joana Espadinha and Margarida Campelo over a simple but effective guitar accompaniment. Fado means "fate" and, with lyrics that deal with the harsh realities of everyday life, the song form is sometimes likened to a Portuguese version of the blues.

It provides welcome relief from the youthful, self- consciously artistic endeavors that have gone before and that follow in the portentous closer "Pressagio," Omen.