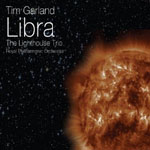 Listening to British reed player Tim Garland, it's easy to be reminded of saxophonist Sonny Rollins' remark, decades ago, about Stan Tracey, the Ronnie Scott's house pianist who accompanied Rollins on many of his appearances at the London club. "Does anybody here realise how good he is?" asked Rollins rhetorically. Happily, times have changed and many Brits do realise how good Garland is, but there remains the suspicion that were he an American, half the country would be genuflecting before him.

A magisterial tenor and soprano saxophonist and bass clarinetist, Garland is also a richly atmospheric composer and arranger. He is at home in both jazz and classical musics, and in either big orchestral settings or smaller, more intimate surroundings. These qualities are all heard, seamlessly woven together, on the outstanding 2CD set Libra, which features one of Garland's current trios alongside the massed ranks of the Royal Philharmonic Orchestra.

Garland has two trios on the go in 2009. One is the prettily understated Acoustic Triangle, with pianist Gwilym Simcock and bassist Malcolm Creese; the other is the more expansive, at times ferocious Lighthouse Trio, in which Creese is replaced by percussionist Asaf Sirkis, who plays not a conventional drum kit but a customised percussion set-up. Since it was featured alongside the Northern Sinfonia on If The Sea Replied (Sirocco, 2005), the Lighthouse Trio has been Garland's most active live band and it is at the core of Libra.

The trio, augmented by the Sacconi Strings on just one track, is heard unaccompanied on Libra's second disc, "Moon," a series of live recordings. Most of the crowd noise has been edited out and the sound is rich, resonant and warmly embracing, live recording at its best. There are three covers—Miles Davis' "Blue In Green," Kenny Wheeler's "Sly Eyes" and Charles Mingus' "Nostalgia In Times Square"—and four Garland originals. The salsa and tango informed "Bajo Del Sol," with Garland on bass clarinet, shows how intense the Lighthouse Trio can be and just how much noisy excitement three musicians can create while still remaining lyrical.

On the first disc, "Sun," the trio is featured alongside the RPO on the four-part suite "Frontier." The first part, "Sungod," featuring the orchestra alone, has Garland the composer and arranger exploring the same high volume, high impact territory as the trio did on "Bajo Del Sol," but magnified by a power of ten going on a hundred. Thunderous timpani, big brass, crashing cymbals, and what sounds like bass saxophones dominate. The trio are on an equal footing with the orchestra by the third part, "On Sungod," which includes a killer Garland tenor solo of dervish-like ferocity.

The trio completes the first disc with four studio-recorded tracks. Guest guitarist Paul Bollenback adds a thrillingly percussive, chordal solo to "Hang Loose," which also features Sirkis on hang, the must-have exotic drum for British-based percussionists since it was introduced by the Portico Quartet on Knee Deep In The North Sea (The Vortex, 2007).

Garland's most rounded statement to date, Libra is a masterpiece by any standards.