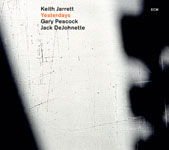 2001 was clearly a banner year for pianist Keith Jarrett and his quarter century-old Standards Trio. Two shows recorded a week apart, have already been released— The Out-of-Towners (ECM, 2004) and the stellar My Foolish Heart (ECM, 2007), where the trio expanded its encyclopedic approach to the standards repertoire to include some serious stride and ragtime chops. Recorded three months earlier, Yesterdays represents yet another high water mark. No matter how well-heeled some of the material is, there's always a unique charm brought to each release in the trio's growing discography. Jarrett, bassist Gary Peacock, and drummer Jack DeJohnette continue to find new ways to respect the material, all the while keeping it fresh—infused with rarified nuance and an ever-present sound of surprise. The relevance of a good song never fades, as long as there are players who can find new ways to explore its full depth and breadth.

The trio's ability to reinvent its repertoire is clearest on Rodgers & Hart's "You Took Advantage of Me," if only because it also appeared on My Foolish Heart—the first time Jarrett has released the same song back-to- back. Eschewing the stride intro from My Foolish Heart for a more harmonically and rhythmically sophisticated opening, it's equally bright, but there's more implication this time around. Jarrett's solo builds inexorably, all the while retaining the deep melodicism that can be heard in the pianist's "singing," as he channels his ideas into sharp reality.

Elsewhere, Jarrett's delivers a solo on Dizzy Gillespie and Charlie Parker's high octane "Shaw'nuff" that starts at a speed train's pace and builds to a conclusion of double-handed unison virtuosity that's thoroughly breathtaking, yet remains acutely centered on thematic construction. Equally thrilling is the series of trade-offs between Jarrett and DeJohnette near the end of the tune, the pair finely attuned, transcending respective motivation for a fundamental and overarching confluence of control and abandon.

As vivid as the up-tempo tunes are, the ballads possess their own compelling vitality, with Jarrett's delicate touch bringing particular sensitivity to the tender "You've Changed," which also features Peacock's most impressive solo of the disc. With a trio this finely honed, it's almost pointless to single out one player who stands above the rest, but while the attention is often inherently focused on Jarrett, in many ways the star of Yesterdays is Peacock. He stretches out perhaps a bit more than usual, delivering another strong solo on the trio's ambling look at Charlie Parker's enduring "Scrapple from the Apple."

With the players often relaxed and functioning without any preconception or expectation, sound checks before a performance can sometimes yield some real magic. A relaxed but subtly profound and meaningful take of "Stella By Starlight," recorded at the sound check to a show a week earlier, is the perfect closer to Yesterdays. This trio may be 25 years old, but Jarrett, Peacock, and DeJohnette are showing absolutely no signs of losing their edge or relevance.

Strollin'; You Took Advantage of Me; Yesterdays; Shaw'nuff; You've Changed; Scrapple from the Apple; Sleepin' Bee; Intro / Smoke Gets in Your Eyes; Stella By Starlight.