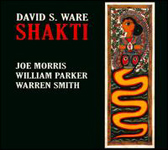 Shakti is the triumphant return of tenor saxophonist David S. Ware. His first studio recording since 2003's Threads (Thirsty Ear), this album marks the recorded debut of his first working group since he disbanded his famously prolific quartet of 1989-2006. An acknowledged master of the tenor saxophone, Ware's influence spans his seminal days in the seventies loft-era to the early Downtown scene, where his exuberant performances encouraged a new generation to investigate the expressive potential of free jazz.

His 23rd release as a leader, Shakti reveals Ware's deepening interest in Eastern philosophy and religion, exemplified by the exotic kalimba introduction to "Namah." Other than a reworking of "Antidromic" from his first AUM Fidelity album, 1997's Wisdom of Uncertainty, this session consists of all new pieces. Conceived around folk-like themes and lyrical fragments, these expansive tunes showcase a darkly poetic side of Ware's strident expressionism.

With a mixture of sublime restraint and impassioned yearning, Ware channels his renowned volcanic intensity, concentrating his ecstatic detours and excessive pyrotechnics into a more nuanced approach. Although his circuitous cadences still brim with unfettered altissimo cries, braying multiphonics and coruscating lower register drones, they are tempered by an architectural sensibility that provides incisive focus.

Joined by assiduous bassist William Parker, Ware finds accord in two new ensemble mates, iconic guitarist Joe Morris and legendary drummer Warren Smith. Morris is one of today's most innovative and distinctive guitar stylists, a singular artist with an unparalleled approach and technique. Smith's career dates back to his seminal loft-era collaborations with such visionary avant gardists as Sam Rivers and Muhal Richard Abrams.

Morris's first recording session with Ware reveals him to be a brilliant front-line foil for the master saxophonist. Morris's spiky, percolating phrases and bright, round tone create a brilliant contrast to Ware's vociferous linearity and dark, burnished timbre. Ware's effusive commentary dominates the proceedings, but Morris's unique contributions, such as his meticulously metered motifs on "Nataraj" or his spitfire needling on "Antidromic," are equally impressive.

While no contemporary rhythm pairing can compare to Parker's clairvoyant work with drummer Hamid Drake, Parker's conversational interplay with Smith yields a malleable pan-African sensibility perfectly attuned to Ware's aesthetic. Their pliant dialogue provides a fluid undercurrent of forward momentum that gracefully modulates tempos and meters. Their sensitive rapport on "Reflection" is supple, while "Nataraj" demonstrates their ability to maintain a hypnotic groove even in the throes of deep abstraction.

Ware presents another aspect of his artistry here, one whose seeds were planted early on with the archival 1999 studio recording BalladWare (Thirsty Ear, 2006). A refreshingly lyrical and emotionally committed performance by masterful improvisers, Shakti ebbs with soulful intensity and inspired interplay, making this one of the most compelling, yet accessible, recordings of Ware's career.